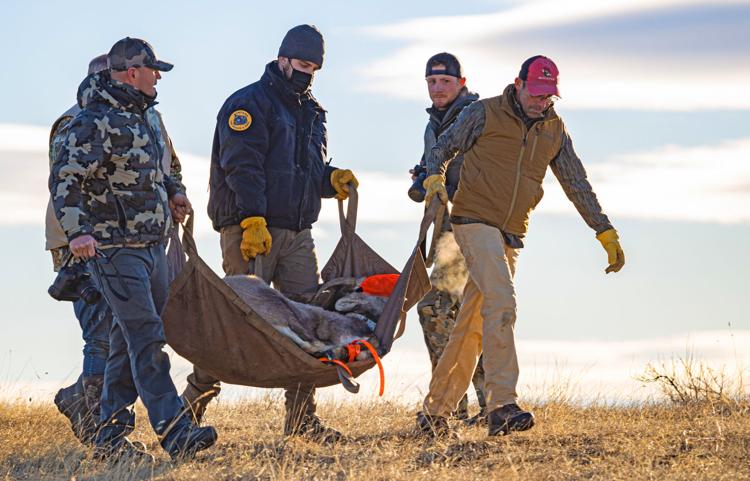 Earlier this year we reported on The Montana Fish, Wildlife & Parks department building a plan to reintroduce bighorn sheep into the Little Belt Mountains. As of December 17th, 2020 that plan is now a reality. FWP employees and volunteers worked together to capture 49 bighorn sheep from the Missouri Breaks area of Montana. After being captured the bighorns were moved three hours away to the South Fork Judith River. The Judith River runs through the Little Belt Mountains, which the new herd will call home. The capture operations were performed via helicopter. The helicopter crew would net the bighorn sheep from the air, then transport them to a central area where FWP staff could get them ready to be loaded on to transport trailers.

“Wildlife biologists have documented bighorn populations in the area since 2015. However, the staff has yet to find more than 6 sheep at one time. This small herd is believed to have migrated from the HD 482 herd, this herd was established in the Beartooth WMA which is roughly 50 miles away.” – Ehuntr.com News Story from 7/23/20

Once the sheep arrived at the Little Belt Mountains the release operations began. All of the sheep were fitted with GPS tracking collars. These collars help FWP biologists to track how and when the sheep move through their new home. After checking on the sheep to see how they faired on their three-hour drive, it was time for the release to happen. As the trailer doors were opened, the sheep scattered every which way in an attempt to distance themselves from the FWP employees and volunteers. As a result, some sheep made it over twenty miles away from the release site. However, the sheep eventually moved back towards the Little Belts and have begun to gather together as a herd.

“When we proposed the project to the (Fish and Wildlife) Commission, the Little Belts in general contain several large patches of high-quality habitat. There are a couple of other areas in the Little Belts where sheep were historically, and we think they can be again.” -Jay Kolbe, wildlife biologist for the Montana Department of Fish, Wildlife & Parks

Now that the herd is gathering together again, the hope is the herd will start to grow. There are many challenges but FWP hopes to see the herd overcome them. Bighorn sheep are very susceptible to diseases that are typically carried by domestic sheep. The hope is that the herd avoids contact with domestic sheep and gets a chance to grow. The overall goal of biologists is to see a herd of around 125 individuals. Biologists expect it to take 10-15 years for the herd to reach that size. At which point they may be able to allow limited hunting in the Little Belts.

The Struggles of Bighorn Reintroduction

There is some worry, however, that the sheep may not make it. In the past 10 years, Montana has several die-offs and two reintroduction efforts failed as well. However, it is reassuring to see Montana continuing its effort for bighorn sheep. Reintroducing bighorn sheep is never simple but here’s to hoping the herd can grow and be a staple in the Little Belts for years to come.

What are your thoughts about this new bighorn herd? Are you applying to hunt bighorn sheep? Let us know in the comments!