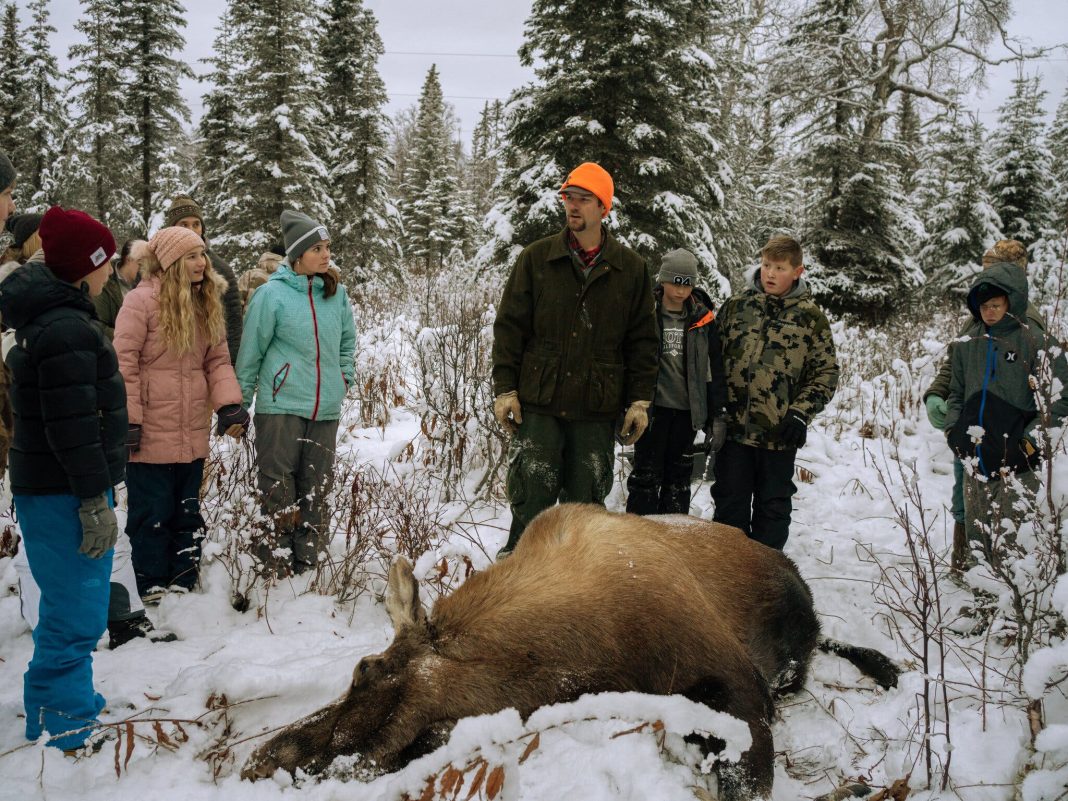 10 students from Nikiski Middle & High School in Nikiski Alaska went on a moose hunting class recently. On Nov. 11, the students gathered in the morning with their teacher Jesse Bjorkman, at a local gas station. Not long after the students loaded up into several vehicles and drove roughly ten miles to a nearby area that is known to hold some moose. A few minutes after arriving in the area the class had seen two separate cow moose. The first one they passed on because it had a calf with it. The second was found to be feeding on tribal lands. The hunt continued past the tribal lands and back into open areas.

Not long after the group spotted another cow moose. This moose was all alone and in a public area. The students gave Mr. Bjorkman the ok and he took the shot on the cow. The moose was hit well but headed for thicker cover. Jesse told the kids to stay with the volunteers at the vehicles and went to make sure the moose was down.

Not long after disappearing into the brush, Mr. Bjorkman reappeared to lead the students slowly along the moose’s trail. As they worked along the trail Jesse quizzed the students on what they should be looking for while following the trail. Eventually, the trail led to the downed moose.

The students slowly moved in on the moose and inspected it closely. Mr. Bjorkman then took out his knife and began to show the students the steps he was going to take to process the moose. After some instructions, the students all put on latex gloves and began helping process the moose. During the processing, the teacher took time to show the students different parts of the animal including the heart and the front and rear quarters of the animal. Once the moose was broken down the kids helped move the processed meat back to the volunteer’s vehicles.

“If we can get kids out enjoying nature and enjoying the world around them in a meaningful way, it’s our hope that they’re going to choose to do those outdoor activities rather than getting into trouble.” – Nikiski Middle School Outdoor-Explorations Teacher Jesse Bjorkman

The Outdoor Explorations Class started at Nikiski Middle School in 2013. Jesse Bjorkman decided to create a class after he learned of the Safari Club International outdoor leadership school near Jackson Hole, Wyo. At the outdoor leadership school, educators are taught how they can incorporate outdoor activities and skills into the regular school curriculum. He decided that a class focused on the outdoors made a lot of sense in Alaska. The class focus on more than just moose hunting. Essentially, The class teaches an expanded version of the Alaskas hunter safety program.  Things like basic hunting skills and protocols, wildlife ecology and habitat, and outdoor survival and safety. This includes Alaska-specific risks like drowning and avalanches.

“It’s the happiest I’ve ever seen this one student, who was cutting up a moose and making food for her family. It’s not for everyone, but it’s definitely for a lot of people that might not have a connection to something else.” – Nikiski Middle School Outdoor-Explorations Teacher Jesse Bjorkman

Even though Nikiski sits in a rural area some of these students had never been hunting. Much of Alaska is very remote and many adults opt to leave their children at home to keep them safe from the dangers of Alaska.

After processing the moose in the field the students took the animal to a local storage area to hang the moose up. The moose was left hanging for two days. At that point, the moose hunting class resumed. Students showed up at the storage area and began trimming and cutting the meat so that it could be packaged. After the meat was packaged the students split 500 pounds of roasts, steaks, sausage, bratwurst, and hamburger with each other.

One of the students, Kameron Bird, 13, wraps up this article nicely. “Moose steak, if you’ve never tried it, you got to.”

So, What are your thoughts on this moose hunting class? Do you think similar classes should be created in other states? Let us know in the comments!