Getting the shot you want can depend on a number of different factors; timing, patience, and even luck, to name a few.  Getting up early in the morning or staying out late into the evening often yield the best wildlife photos, although not always the best of light. Sometimes everything works out in your favor and the lighting is perfect, the background is picturesque, and the animals appear as if on a timer.  Such was the case with this particular photo of a moose cow and her calf last fall (2016).  When I first spotted the cow, she was approximately 150 yards away and I assumed that a small speck was the best photo I’d come away with.  However, she walked up out of the riverbed and towards me, with her calf following close behind.

This particular morning, I was using my Canon 5D Mark II with a Sigma 70-300mm attached.  As the cow and the calf moved towards me, I simply pivoted and kept firing away; the card I most commonly utilize is a Lexar Professional CompactFlash with 32GB so that I don’t have to worry about taking too many photos at any one time.  Within moments, they both walked within 30 yards of me and were completely unfazed by my presence (I’m not sure that they even realized that I was present.  In approximately eight minutes, I took 168 photos.  Obviously, not all of those photos were of stellar quality, the majority of them yielded some fun images. Being in the right place at the right time can create an awesome experience; this is one of my most memorable wildlife experiences (as far as photography is concerned).  Moose are a great subject for photography, but finding them in the right setting can be difficult; sometimes I “cheat”.  Forming connections with others who are more familiar with a particular area can help with finding specific kinds of wildlife.  For instance, the biggest bull moose that I’ve had the opportunity to photograph started out as a tip from a fellow photographer.

Once I’d received this great tip from my friend, I began searching him out, which meant numerous trips in the very early morning hours in Montana.  Prior to getting this photo, I spotted two or three other bulls (much smaller in size) and some cows and calves.  One colder, rainy October morning in 2015, I finally saw this guy and then spent the next hour and twenty minutes snapping photos.  For this photo, I used my Canon 5D Mark II with a Tamron 2x extender and the Tamron 600mm lens. He was definitely a lot of fun to photograph and he was so complacent that it was rather difficult to head for home.  I took off my waterproof jacket and put it over my camera and tripod, to protect it from the rain.  It was a wet morning! In the end, to get the shots that you want, have patience and be willing to snap numerous photos in hopes of really bringing home the few that are worth keeping. The more you have, the more likely it is that you’ll have a folder full of great captures. 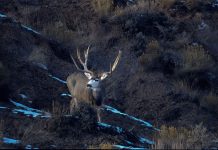 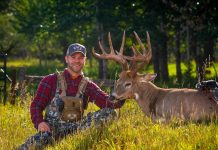 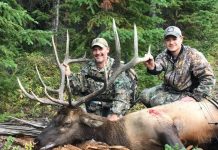