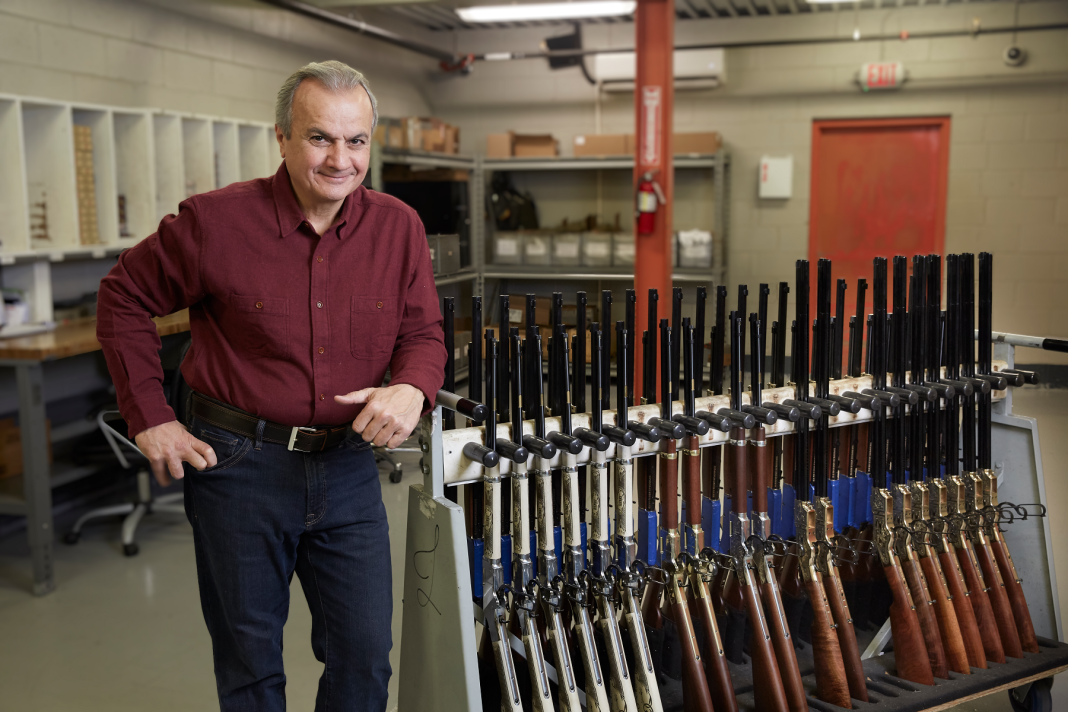 Henry Repeating Arms is proud to officially begin its landmark 25-year celebration as one of the country’s largest long gun manufacturers and the leading lever action maker.

Henry Repeating Arms Founder and CEO Anthony Imperato took his first step into gun making by taking out a home equity loan in 1993 to start the Colt Blackpowder Arms Company. This company made historic Colt revolvers and muskets under license from Colt’s Manufacturing. Along with his father, Louis Imperato, the father-son duo leveraged decades of the family’s experience in the gun business and began developing a rimfire lever-action rifle in 1996. Subsequently, in March 1997, the first Henry Repeating Arms model H001 Classic Lever Action .22 rifles were shipped from a small factory in Brooklyn, New York.

Henry Repeating Arms is now headquartered in Rice Lake, Wisconsin. The company employs over 550 people and operates three manufacturing facilities in Wisconsin and New Jersey. The company now manufactures over 200 different rifles and shotguns. These firearms come in a wide variety of calibers and finishes for hunting, home protection, collectors, and a wide variety of shooting sports endeavors. Notable standouts include the company’s flagship rifle, the Henry Golden Boy 22. Likewise, the Golden Boy’s centerfire counterpart, the Henry Big Boy is very popular. Henry also makes a complete line of youth-sized rifles and shotguns and a sprawling collection of engraved Tribute Edition firearms. The company has also rewritten the book on the popular modern approach to the lever gun with the X Model series. Henry is dedicated to America and their motto proves it: “Made in America, Or Not Made At All.”

All Henry rifles and shotguns are supported by a lifetime warranty, a personal guarantee from Anthony Imperato, and an award-winning customer service department that is empowered to make any decision necessary to ensure that every interaction results in complete satisfaction. As a result of this outstanding customer service, was named the winner of a Stevie® Award in the Customer Service Department of the Year category at the American Business Awards in 2016.

“Without a doubt, we would not be here celebrating 25 years of success without the hard work and dedication of every Henry Repeating Arms employee, several of whom have been with me since day one. They are the heart and soul of the company. And to all of Henry owners around the world that chose to make us a part of their lives, thank you, we are eternally grateful.” – CEO and Founder Anthony Imperato

Henry has supported many great causes each year. Things like making significant financial contributions to children’s hospitals and families of critically ill children. The companies Guns For Great Causes also helps support active-duty and military veterans’ organizations, law enforcement, and first responder organizations, pro-Second Amendment organizations, shooting sports education groups, and wildlife and habitat conservation entities.  Likewise, as a part of the 25th-anniversary celebrations, the company is donating 1,000 Golden Boy “Silver Anniversary” Limited Edition rifles to raise a total of $1,000,000 for distribution among all of these deserving constituencies.

The pillars of the company’s success are its employees and Henry owners.

“I am incredibly proud to have been involved with Henry for 24 of the 25 years that the company has been making and shipping guns, but I feel an even greater sense of pride when I look to the future.” This company was built on a solid foundation of talent and sheer determination, and while we have come a long way, it still feels like we are just getting started. Henry fans and customers have a lot to look forward to this year and beyond.” – Company President Andy Wickstrom

For more information about Henry firearms, you can visit henryusa.com or call 866-200-2354. Likewise, you can read a recent interview with CEO Anthony Imperato by clicking here.

We at Ehuntr are proud to bring you news regarding Henry Repeating Arms. Have you ever owned a Henry? How did you like it? Let us know in the comments!