It was mid-February and I was 20 years old on one of my first stands. A college buddy’s father introduced me to coyote hunting and allowed me to tag along with him that day. It was a cold South Dakota morning with just a slight breeze. His trusty hunting partner, a border collie, ran around in front of us. While the border collie was running around, my buddy’s father let out 2 long howls and paused for a few minutes. I knew little to nothing about coyote hunting, but what I always saw on TV was the typical stand tactic wherein the hunter would let the rabbit squeal for 20 minutes and then get up and move to the next spot.

After a few minutes, my buddy’s father let out his 3rd lone howl. I watched his dog mill around 50 yards ahead of us and then heard him say “We have two coming hard at 12 o’clock.” I will never forget those words; my heart instantly raced with excitement. He let out a short whistle; this was his command for his dog to come back. His dog raced back to him and the coyotes kept coming on a complete sprint. They came within about 100 yards and stopped. I tried to contain my nerves but shot right over one of the coyote’s back. They took off without a scratch, but that stand and those 3 howls hooked me on coyote hunting from that day forward.

Fast forward 15 years and I’m still mesmerized by coyotes, the ultimate predator. I always hear about people going out hunting in the early and late fall with the rabbit stand tactic and constantly getting coyotes to respond. But then they go out in January, February, or March and just can’t call in a coyote. Just like any other species, you have to change your tactics to the season. January-March is breeding season for coyotes. Coyotes become territorial during this time. Don’t just get on a stand and go directly into a prey distress sound. Don’t get me wrong, you will still call coyotes in with the distressed prey sounds.

Coyotes do have to stay warm during the winter months, and the best way for them to stay warm is to eat! But we are calling to those “educated” coyotes that have heard the same prey song and dance before from previous hunters. So, a lot of times you get coyotes to respond but lock up just out of rifle range. During this time of the year, I almost always start with Coyote vocals. My pattern is usually a couple lone interrogation howls, with a two-minute pause after the 2nd howl. If nothing is coming in after 5-6 minutes, I move into a couple short challenge howls and barks. I do that a few times with approximately 1-2 minutes between howling sequences. After 12-14 minutes I move to Female and Male coyote challenge howls and barks. This is the most aggressive part of my stand sequence. This is like your buddy Triple Dog Daring you to do something while you were a kid. You get to a point where you have enough and you just do it; whether to shut them up or because you get upset and want to prove a point. Coyotes are the same way.

More often than not they respond to see what is going on in their territory and to respond to a fight. That is when a 2nd caller or an E-caller comes in handy. I continue the male and female challenges until the 20-minute mark. If I still get no response I always end the stand on Pup Distress. I do this for the winter months but also during fall months. Whether it is motherly instinct or not, the pup distress always brings in a couple coyotes each year that just weren’t responding to the typical distress or coyote vocalization sounds. I often refer to this time of the year as PRIMETIME! It can be some the best calling times of the year. The coyotes are often the most aggressive.

Another reason I refer to this season as PRIMETIME is for obvious reasons…. its winter! Winter months are obviously the coldest months of the year, so coyote pelts become the thickest and highest quality. Be aware that come March you will start to see some coyotes start to “rub” their winter coats in some climates. A prime coyote harvested from certain regions can fetch anywhere from $20-80 per animal. There are even some states that have bounties on coyotes throughout the year. The purpose of the bounty is to help lower big game mortality rates by lowering the coyote population.

So after your big game hunting season comes to end don’t hang up your predator rifle, prime time is just beginning! Like all hunting tips, take it with a grain of salt. Try patterns out for yourself in the area you hunt. A coyote may respond differently one day to the next, or even from one region to the next. This is a great time to hunt predators during your typical “offseason.” So put your cold gear on, dial in your gun, and grab your howler. I promise once you howl your first coyote in, you will be hooked for life! 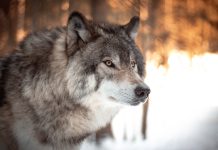