I woke up and looked outside.  The weatherman had predicted a windy day, but with their track record I always wake up and check for myself.  The small trees in my front yard were doubled over from a strong north wind. I thought to myself, “what a perfect day to stay home and spend time with the family.”  I was already up so I made a pot of coffee and vegged on the couch to watch a little TV before the family was out of bed. I had a popular predator hunting show on DVR and since the weather was preventing me from hunting I decided it was my next best option.  Over the next ½ hour I watched the host and his cohorts call in a dozen coyotes on a large commercial whitetail hunting operation in the Midwest. These coyotes acted as if they had never seen a human. They all came into the call tripping over their tongues and stood around giving the hosts follow up shots after they missed on the first shot.  The DNA footprint of these coyotes was exactly the same as the coyotes I hunt on public land but it was obvious that these guys were hunting uneducated coyotes that most DIY public land hunters never have access to. Hunting coyotes on public lands is very rewarding when I’m successful. I know I’m outsmarting the most wary of prey.

The single most important factor in being a successful public land predator hunter is locating areas that hold a high density of coyotes.  My home state of Wyoming has some of the most predator-rich public lands in the Western United States. With that being said, it also has large tracts of real estate that are almost completely void of coyotes.  These voids are fluid and change from year to year. Coyote populations seem to fluctuate around food sources and disease. If I start killing coyotes with mange in an area I can bet there will be a natural reduction in that area the following years.  Keeping a good journal will raise your success rates exponentially. A journal makes you a more effective hunter for any species you pursue. 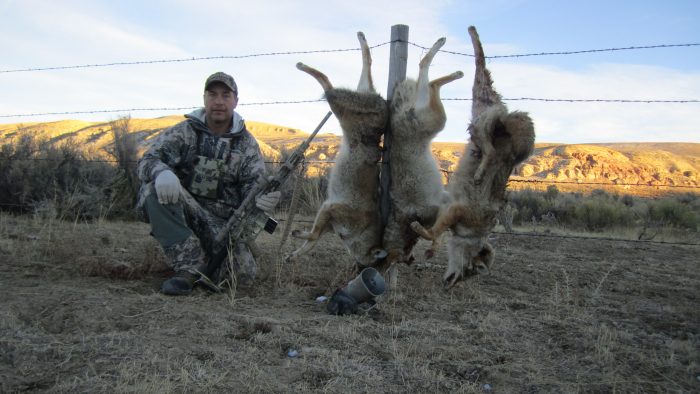 I use a number of indicators to ensure the area I’m hunting has a high number of coyotes.  The most important is scouting. I start scouting for coyotes every year in early summer. My coyote scouting efforts typically coincide with my scouting efforts for big game.  As I start to look for antelope, elk, and mule deer I’m also paying close attention to coyote sign. I’m paying attention to scat and tracks on roads and water holes. When coyotes have puppies and are raising young they have to be fairly close to a water source.  I set up scouting cameras for big game, but if I find a water source that a coyote family is using during the summer I know some will be around in the fall.

In 2014 I was heavily scouting a limited quota elk area with a friend who had acquired a tag.  Over the summer scouting season, I used the same scouting cameras we had set for elk to observe an abnormally large amount of coyotes on a couple of water holes in the unit.  We glassed coyotes while looking for elk and the roads and trails were littered with coyote sign. I kept notes in my coyote journal and assembled a plan for the first day I could break away to hunt coyotes.  The first day I hunted that area I called in 10 coyotes on 13 stands and harvested 8 on the day. I ended up killing 16 coyotes in that area in 2.5 days of hunting.

During the summer scouting season, I also document potential locations in which to call coyotes.  One of the keys to calling coyotes is having some elevation advantage when setting up to call. This is also true when glassing for big game.  I often call coyotes from the same places I was glassing for deer and elk in the summer.

Another way to ensure I have an adequate density is to locate coyotes with an e-caller after dark.  I wait for a calm night and travel into areas that historically have held a decent number of coyotes.  I quietly exit my vehicle and walk 30 yards or so from my truck so I can be free from all noises. Then I use a series of coyote howls and wait for coyotes to respond.  If I don’t get a response I play a more aggressive challenge howl or a group howl. Sometimes I have to use several different howls to trigger a response. When coyotes respond I do my best to count how many coyotes are responding.  I also mark their general location on my GPS for future reference. I typically drive 3 miles and repeat this sequence again. If I’m in an area that has many coyotes it is not uncommon to drive 3 miles and get out and hear coyotes howling as they set off a chain reaction. Counting coyotes while locating allows for quantifying how many coyotes are in one particular area.  I lean on this tactic heavily when I’m determining what areas to hunt on the day of a coyote contest. Ensuring that the area you’re hunting has lots of coyotes is hands down the most important thing you can do to up your success rates on public lands.

Coyotes are not much different than any other animals when it comes to being over pressured.  They get wise and respond less to calling. Coyote hunters looking to up their success rates need to learn to recognize areas that have been hunted.  If your calling off a heavily traveled county road in Late November or early December there is a good chance someone has already called this area. I use computer based maps and Google earth to identify two track roads that take me away from or between these more heavily hunted areas.  I really like two track roads that have fences and gates. At the gate entry point, I can place a piece of scrap wire or bailing twine in a manner that requires removal to open the gate essentially creating a seal. If my seal has been broken I know someone has been in the area I intend to hunt.  It may not mean someone was hunting predators but I know I need to be mindful that someone may have been hunting in this area. The more I can check my seals the more effective this becomes.

Determining if coyotes have been hunted takes some practice. If I’m seeing coyotes that aren’t responding to the call I can bet these coyotes have been educated.  I also look for coyotes leaving the area when I start calling. The last easily recognizable symptom of call-shy coyotes is when I start calling and hear coyotes howling at me shortly after.  I want to hear coyotes howl at me if I’m using coyote vocalization. But if I’m calling with distress sounds it’s the last thing I want to hear. Listen for short wavy howls accompanied with barks. I keep calling the first time I hear the warning howl but if I hear this multiple times in the morning I start thinking about a new area to call.  This warning howl can also mean you didn’t do a good enough job getting into the stand undetected.

The easiest way to deal with educated coyotes is to not hunt them, but there are situations that can help you if you have no other choice. You must change up calling tactics.  I’m a huge fan of electronic callers because they allow me to play sounds that cannot be easily replicated with hand calls. 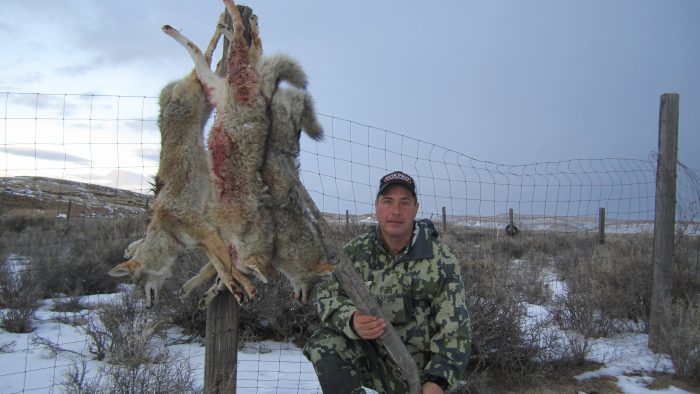 By late November I never call a stand with straight rabbit or bird distress.  If I’m using rabbit distress I’m mixing a lot of ravens, magpie, and hawk sounds into my calling sequence.  3 parts of prey or scavenger bird noises to 1 part of distress is a general rule of thumb. I also get away from playing rabbit or bird distress and switch to fawn and domestic livestock distress.  Domestic calf distress with a heavy dose of ravens have accounted for a lot of coyotes on the stretcher. I also like mixing coyote vocalization with distress. I normally use a female coyote challenge bark while I’m using a mouth call to reproduce fawn bleats or coyote pup distress.  Two sounds at the same time can really soften call-shy coyotes.

The last calling tactic I use is playing on the curious nature of K9’s.  One late January day I was calling in the famous Red Desert in Southwestern Wyoming.  As the day unfolded it was clear I had run into a bunch of educated coyotes. About 10 minutes into the stand I had glassed two coyotes hung up a ½ mile away.  I tried a few sounds from the mouth call and then started going through my remote looking for the magical sound that would get these two heated up. After playing a dozen different noises I hit a chicken distress.  For the record the closest chicken to this location was well over 80 miles away. Almost immediately the male coyote got off his haunches and started coming my way. He was not coming hard just meandering in. A minute later the female joined him to investigate.  At 200 yards she caught him and the race was on. The female was 25 yards from me when my shotgun barked. The male was 100 yards away and did an about face and was headed out when the e-caller switched to a dying coyote. He did another 180 and charged the caller to help what he thought was his mate. I shot him at 11 yards as he ran right over the top of my e-caller.  These coyotes weren’t as hungry as they were curious.

The most overlooked and productive time of the year to call coyotes comes in late winter when coyotes are thinking about love.  Most hunters have called it quits for the year. Public land hunting pressure starts to rapidly subside in December and by the end of January most coyote hunters are done.  Coyotes are in the middle of breeding season and are even more territorial than normal. Coyote vocalization is deadly this time of year. The mistake most hunters make is starting with vocalization and when nothing responds in 5 minutes they switch to distress.  When using coyote vocalization you need to be willing to stay with vocalization. Sometimes coyotes come quickly when calling with vocalization but normally it takes longer to develop. My calling sequence this time of year normally starts with a series of female howls.  I do a couple of howls and then wait 45-60 seconds before repeating. Eventually I add male howls to the sequence. At minute 12-15 I switch to female and male challenge howls. At minute 22 I add a series of pup distress calls. Then I close the stand with some kind of coyote distress.  If I haven’t seen or heard a coyote in 30 minutes I leave. If I have observed a coyote I will stay to the 40-60 minute mark.

Hunting coyotes on public lands can rival hunting private lands. But just like all DIY public land hunting hunters have to work harder and hunt smarter than our hunting brethren that can afford or have access to exclusive private lands. 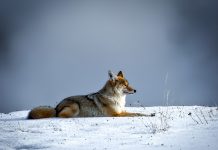 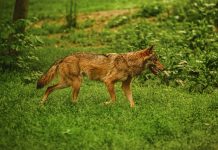