For the longest time growing up in South Dakota antelope was out of reach due to a lack in population and limited tags. It wasn’t until I made my way a bit further west where I began chasing these amazing and beautiful animals. I have a lot of respect for antelope and their elusiveness. They draw me each year as I have continued to chase them with my bow.

Each fall it is the first hunt of the year making them prime for me as I usually have some cabin fever in anticipation for the fall. I have hunted them mainly in three ways; on water in a blind, spot and stalk, and the ever exciting decoying. One way I have found success in addition to the other three is ambush hunting. However, that can be tough depending on terrain. Keep in mind I will cover these topics briefly. Each of them deserves an article, each in their own right. With that said all of these options are done by me each and every fall with the exception of blind hunting depending on how wet or dry the year is.

I shot my first antelope after finally putting in and drawing a rifle tag. I was able to kill my first couple with a rifle. Finally, in 2010, I made my first archery kill ever sitting on water and killing a great buck. When looking at antelope they are one of the most intriguing animals out there. You are talking a tiny animal that can run at speeds faster than any other animal in North America and coloring that once you have your hands on gives you true appreciation. Another thing to keep in mind for those that have never hunted them, they are one of the most affordable and accessible animals found out west. They also make an awesome shoulder mount to keep those memories alive. While I did a shoulder mount with that first archery buck I also have other European mounts on my walls.

That first archery buck took all the patience I had in me. I spent close to 7 days in the blind waiting for one opportunity. Just days prior I located a nice antelope buck on a prairie dog town and missed him clean low. This is a hunt I will never forget. Another buck I killed took some skill and luck. I had been watching antelope cross below me and I intercepted their path giving me a great 40-yard broadside shot and it was done.

I have yet to master decoying and spot and stalk, but they are always attempted year after year. My hard work will pay off in time closing the gap with both tactics. Don’t be afraid to decoy even in early August as I had an encounter with a buck claiming his territory on August 16th, just the second day of the archery season in Montana. I have also used my decoy to simply get within sight of a herd of bachelor bucks. I have seen success with them being curious, but just not closing the gap quite close enough.

One of the best things about antelope is the fact you can hunt them from sun up to sun down. They are one of the few that give you an opportunity at any time during the day. Another thing I have found in some areas is that they will actually go into timber patches giving you the upper hand on them as they are generally out of their realm in trees. During early August your best bet is water, but that should be done during dry years. As I have found in eastern Montana where I generally hunt water can sometimes be plentiful making sitting a huge guessing game that takes a lot of luck.

Anyone that ever tells you antelope doesn’t taste good is doing something wrong. When it comes to wild game for me antelope is right after elk. My favorite portion of an antelope is the tenderloins. I will add a recipe later on in an article that is mouthwatering. Although it may not be the healthiest it is only eaten a couple of times a year or less. Not that the antelope isn’t healthy it would be all of the added ingredients.

In closing, if you are looking for an animal that gives you plenty of opportunities, that is a challenge, and a hunt that is iconic to the west make sure and look at antelope. If you have never taken the time to chase this amazing animal do yourself a favor and give it a shot. Many states offer great opportunities. Keep in mind it can be done DIY without a guide in many if not all of those states. You don’t have to start with a bow, but if you choose to do so be prepared for long sits as well as fast-paced action during the rut. Best of luck to everyone this year. My days of antelope hunting have not ended for 2018 and my mouth is now watering thinking of antelope tenderloin. 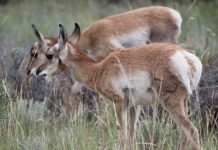 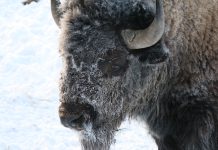