“This is an interesting journey” I am thinking to myself as I begin to write this story for you all.  It seemed as if it were only yesterday.  I had begun my journey which took a foothold in my life a little over a decade ago now. Which in retrospect sounds like a long time as I think about it.  However, my goodness how time has flown by. I would like to think I have improved with time.  I’ve heard old ranchers tell me over the years that you get better with age.  The truth of it is that I’m simply getting older.

These years passing have taught me a lot about myself.  They have allowed me to come to terms with much in my life. For example, what I am good at or likewise, what I am horrible at.  Just recently I was at a wedding and was asked to dance… There was a long pause and I must admit that I won’t be winning any talent contests anytime soon! Hunting, AHHH HUNTING! Now, this is something that I could talk about until the cows come home!

Over the last decade, I have decidedly become simply a deer hunter, nothing else gets me like an old Muley buck will. Elusive, Wiley, untamed wanderers of the West. I love chasing them up high, in the middle country and down low, which is where our story begins.

I love all habitats equally, however, the desert is a creature all unto its own.  The animals in the desert are highly adapted and evolved in their ability to survive here. 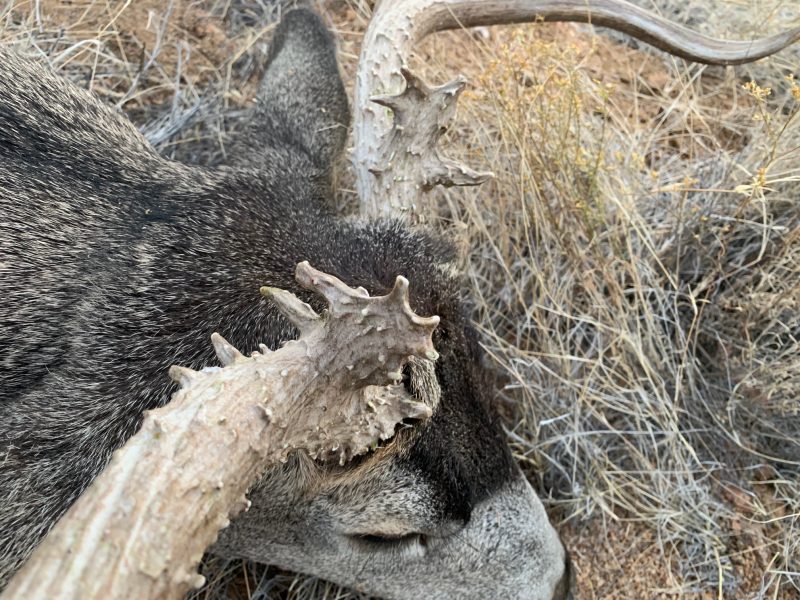 Together with my good friends Justin and Chad we were out and about through season.  We were seeing some nice animals, however, we were quite fixated on a giant we had turned up.  He consumed days, weeks even, literally sucking the life from each fading hour of needed sleep. It sounds crazy but we hunted so hard for this buck that it started not being much fun at all.

Fast forward to the day I decided to take my little boy hunting.  It wasn’t until hunting with him that I decided it was time to call it a season! My boy Wyatt, Gabby and I had hunted all day long seeing a few animals. Honestly, the morning was quite slow.  I could tell the crew was unimpressed with this particular hunting spot.  However, after a nap and some snacks in a sand wash, we pushed onward glassing small cuts and far off basins searching for movement.  Through the day we actually found a couple decent bucks, however knowing what I was really after, I wasn’t about to turn an arrow loose on one of those little buggers, which had Wyatt nearly up in arms. You could literally see the disapproval on his face as we turned away to continue up the ridge, pressing further into deer country.

The light was fading, I think my team had given up on me as they were playing some game called “name the animal” and I was off blissfully glassing each pocket and recess for a mature buck to get out of his bed and begin feeding.  About 20 minutes before sunset, I saw a buck! He was feeding up the ridge about a thousand yards below us and completely unaware we were there. I ran over to them, pulled out my Vortex spotter, cranked it to 45X and said: “there’s a shooter” under my breath quite excitedly! I saw he had cheaters on him and deep forks! With my little boy there, there was no way I was passing up this buck!

I literally told him “Let’s GO” and off we went! We dropped down and over the ridge, off the other side, where we knew he couldn’t hear our approach, the wind was solid, and we literally did a fast-paced jog down into the crease between us and the big buck.  As we approached, we were both breathing heavy as I dropped my pack. We took a moment to compose and began to slowly sneak up to a small saddle in the ridge. I couldn’t see anything at that moment and had Wyatt sit tight on the ridge as I surveyed the country right over a small fold next to us. There he was! Below us at seventy-one yards feeding broadside! I knew that with light fading quickly and Wyatt with me, there was no time to try to sneak much further, so I took a step out from some brush to clear a lane for my shot, settled my pin on his shoulder and let the Hoyt rip! That distinct CRRAAAAAAAAACK echoed off the small drainage as the buck wheeled and literally collapsed within five yards!  Wyatt ran up to me, we both ran crashing down through brush as we saw the buck in the bottom kicking his back legs, I drew on him again and anchored another shot in the buck! After that, all went silent and there we were standing there. I gave him a brief moment and took a pause to look at my little man and give him a high five! It was done!

We boned the meat out and packed the buck out under complete darkness, side hilling a large drainage and walking out a touch under three miles in the dark.  I was so proud of everyone for being complete champions under the circumstances. And very impressed at Wyatt’s resilience as a young boy to control his thoughts and keeping his composure as we hiked off the mountain that night! No other buck would have done, this was simply perfect in every way and a hunt I will never forget with the ones I love the most!  A day and a night to remember with a trophy-class buck on public ground. A truly defining moment for me without a doubt! 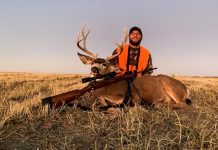 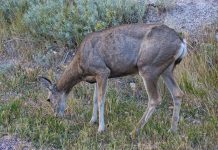 UTAH ANTERLESS APPLICATION TO OPEN MAY 27