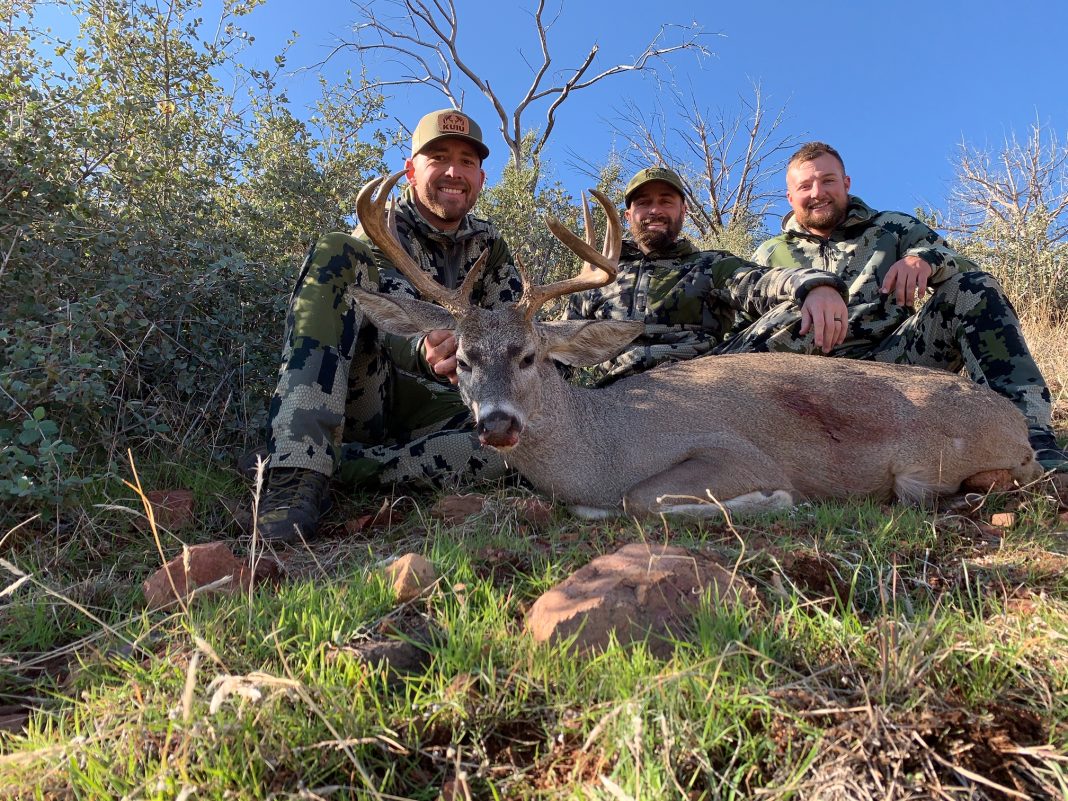 I have always loved hunting but for the last 10 years now I have been borderline obsessed.  My wife finally understands, that for me, hunting season never ends.  It is a 365-day cycle between scouting, hunting, shed hunting, research, and helping others on their hunts, it literally never ends. When I can’t be out in the woods physically, I listen to podcasts and watch YouTube videos to get my fix.

To get to the story, 2019 was a pretty good year for me.  I drew a limited entry archery Bull tag in Utah, had a general muzzleloader deer tag in Utah and drew a late December coues tag in unit 21 in AZ.

I had never hunted coues deer really.  But knew that I wanted to but also wanted to draw a good tag that I was confident I could have fun, see deer and take a good buck.  In January of 2019, me and my best friend that lives in Phoenix went to explore unit 21 with our bows and a few OTC deer tags in our pocket.  It was really supposed to be more of a bro camp trip than anything unless we got into a pocket of mule deer that we felt like we could hunt. 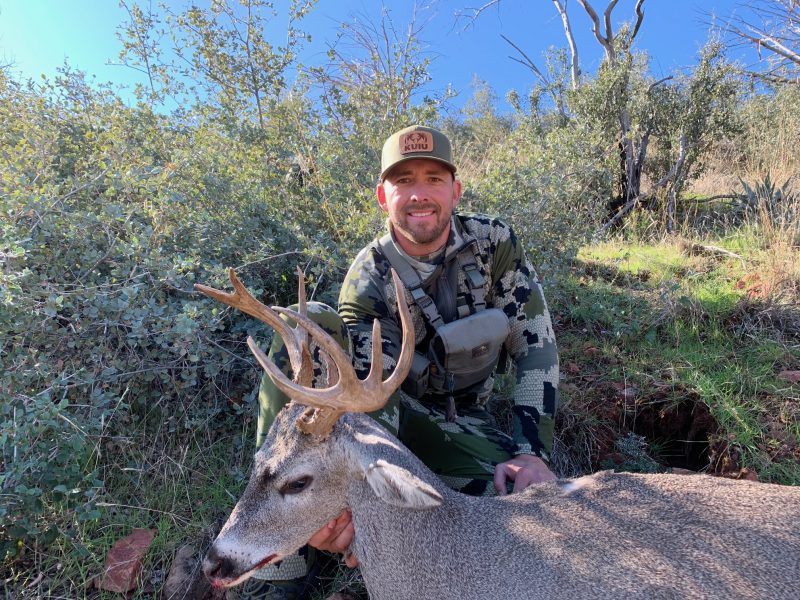 Well the first day in the unit in mid-January, we were driving roads and glassing as we explored.  About 9:30 in the morning I glassed up a really big coues buck rutting really hard.  Lots of does and lots of other bucks.  To make a long story short, we never pursued hunting that buck because he was never in a good situation.  However, I knew that after seeing that, I was going to try and draw that tag.  I did my research and my odds were not looking great.  With 7 points, GoHunt insider told me I had a 7% chance to draw the late rifle tag that year. Guess who got lucky?

With a limited entry archery bull tag, a premium late rifle coues tag, expecting our 4th child in September, and a few other tags and hunts to help friends with, I knew 2019 was going to busy.

I scouted hard all summer for my elk tag and had a few target bulls that I wanted to chase.  I ended up killing my first bull elk on September 1st.  Spot and stalk, no calling at all.  Glassed him up and shot him at 34 yards.  My daughter was born on September 4th.  Pretty close call.

I went out opening morning of my muzzleloader general hunt and shot a 170-inch buck that I was super happy with.  I even bought a fall turkey tag and took my whole family out, baby and all a few days before thanksgiving and killed a turkey.  The 2019 season was shaping up to be pretty special.

Bull elk with my bow, Mule deer with a muzzleloader, a turkey with a shotgun.  I just needed to cap it off with a big coues buck with a rifle.

I knew where I wanted to hunt and was going to give it the whole opening weekend before I gave up on the spot that I had seen that big buck back in January.  Opening day, me and two buddies were on our glassing spot before the sun came up.  No one else was around.  If fact, we only saw two other hunters the whole time and they were in different areas.

Opening morning was great.  We glassed a lot of deer.  Most of them between 9-11 in the morning.  We glassed three bucks in a group. One big, one medium and one small. I know that at 1.5 miles if we could see a big frame on a buck, he was probably big.  We watched him and the other bucks feed in and out of the trees until they went into a draw and we lost them. The next morning, we were in the same spot, looking for him.  Seeing if we could get a better look and even see if we could pick up other big bucks.  That morning we saw plenty of does, but only one average buck.  Discouraged a little bit, we left around lunch and went looking in other areas.

The third morning, we planned to try another spot.  Honestly, I was not anxious to go kill a buck. I had planned the 27-31st of December to be out there and hopefully catch rut action anyway so I was fine looking into different country.  We got to the spot we wanted to be in that third morning. Unfortunately, there was a truck there and we could see a headlamp up the hill we wanted to be on.  So, we changed our plans and went back to our original glassing spot.  About 9:00 am after watching different doe groups, I glassed the big buck up feeding in the sun. He was about 150 yards from where we saw him opening day.  He was with the smaller buck and it was just the two of them. 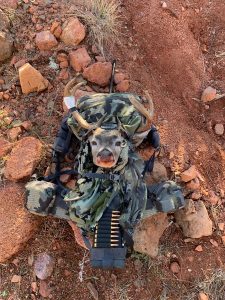 I left my buddies on the point,  grabbed my rifle, my binos, and a bottle of water and took off after him.  I still wasn’t sure if I wanted to shoot him, but I knew I had to get a closer look.  5 minutes into my death hike after him, my buddies let me know he fed down into a draw and they could no longer see him.  A little deflated, I thought “what the heck”. Nothing really to lose so I kept going.

I stopped multiple times trying to survey the land around and see if there was a spot, I could get to with some elevation to see down into where he went.  After a 45-minute hike in there, I found a perfectly round knob of red dirt that I could lay down on, set my rifle up, and see directly into the draw the bucks went into.  I was only 200-300 yards away from where I thought the bucks were, but the wind was right. I was going to be patient and wait for them to show themselves.

3 minutes after I laid down and had everything set up, the wind totally switched and blew over the top of me. It went right up the draw that I was pretty sure the bucks were in. Instantly, the smaller buck came out of the bottom of the thick draw and was standing there looking my way.  He had smelled me and wanted out of there.  He worked his way up and out of the draw.  Not 30 seconds after the smaller buck made it up and over the top safely, the big buck came out of the same spot and was trying to get out as well.

With little time to really get a look at him, I saw through my rifle scope that he had a good frame and was twice the body size of the smaller buck I watched escape.  I knew I should probably shoot him.  He made his way up stopping behind bushes and not giving me a shot.  There was one opening before he hit the top that I waited for him to step into and pulled the trigger.  Little did I know, my buddy was recording the whole thing through his spotting scope from a mile and a half away.

They came on the radio not believing what had just happened and me not really knowing what the buck I had just shot even was.  I told them on the radio that I know he had a frame and a crabby 3 point side.

I laid there for a few minutes and explained to my buddies to empty out my Icon Pro 5200 pack except for my kill kit and bring it when they came down to me.  (Also made sure they brought food because I was too busy glassing all morning and hadn’t eaten anything)

At 250 yards, it didn’t take me long to get to him.  I walked up on without ever seeing a coues deer that close. Not even knowing what he was and was in complete shock.  Before even touching him, I radio-ed my buddies and told them that he was a freak.  His right side is a mainframe crabby 3 point but super bladed and heavy.  There is a 1-inch broke kicker coming off the back of the antler and a 4-inch eye guard.  His left side is a 4 point mainframe and his main beam spits on the very tip.  He has a 1.5-inch kicker off the base of the antler pointing forward and a 3.5-inch eye guard.  Super heavy and bladed as well. 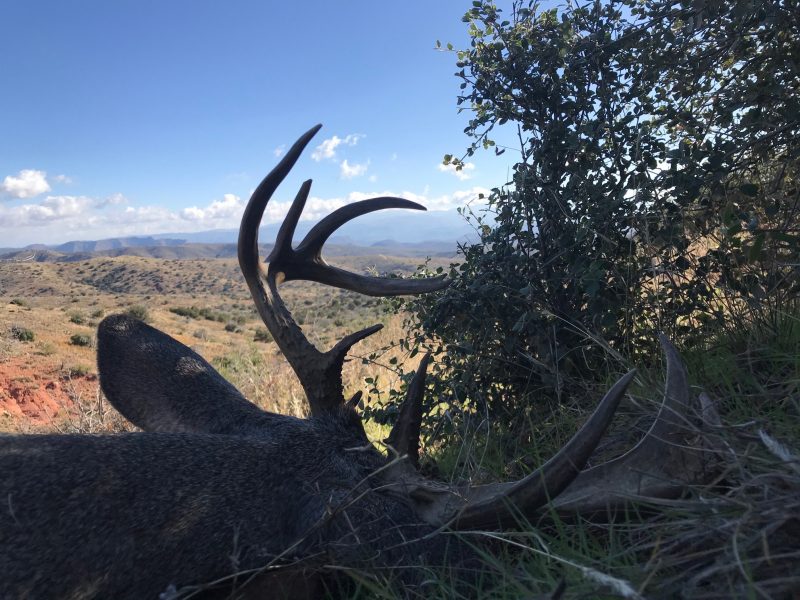 Standing over the deer, taking pictures, quartering and caping the buck was all super surreal.  I really didn’t know how big he was.  I didn’t have any experience with coues deer.  He was cool, had a lot of character, and that I would sleep well knowing that I harvested a better buck than I was expecting to so early in the hunt.  Part of me wishes I could have had the post-Christmas hunt experience, and maybe one day I will have that.

We got the buck packed out to the truck, and back to camp.  Packed camp up and headed home.  I didn’t know if I wanted to run a tape on it.  Because score is just a number and I didn’t want a score to take away from my trophy.  Well, I broke down and put a quick tape on him.  I came up with 109 and 6/8 and was super conservative. A few days later, I had my taxidermist run a tape on him just to make sure and he got 110 and 6/8.

Honestly, I feel so blessed to have that experience. I feel blessed to spend time with my best friends doing what we love.   I was blessed to have had the 2019 that I had in the hunting sense and with my growing family that I cherish.  2019 will be a hard year to beat but I will try as hard as I can.  That is what drives me and motivates me to do what we as hunters do day in and day out. 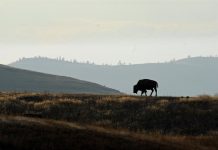