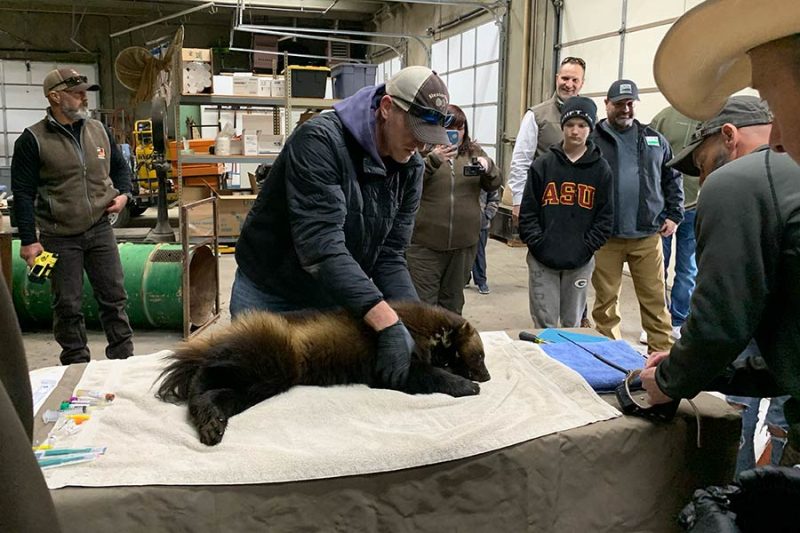 The Utah Division of Wildlife Resources (DWR) was able to capture and collar a wolverine for the first time in the state.

A wolverine was recently spotted in Rich county in Utah. On the morning of March 10th, a fixed-wing aircraft from USDA-Wildlife Services was conducting livestock protection surveys in the area. While flying over the area the pilots noticed an animal feeding on a dead sheep. They flew lower to get a closer look. At that point, they realized that they had sighted a wolverine. They immediately contacted their supervisor about the sighting. In return, the supervisor contacted the DWR about the sighting.

The DWR contacted the sheepherder in charge of the sheep that had been found and began a search of the area. Between the aerial survey and officials searching the ground, officials found that 18 sheep had been either killed by or fed on by the wolverine. DWR officials and the sheepherder removed the 18 dead sheep and set up two-barrel traps in the area. Both of these traps were baited with the hindquarters of some of the dead sheep. A private landowner and the sheepherder checked the traps on the morning of March 11th. However, neither of the traps were set at that point. Later that morning a second shepherd reported that one of the traps was triggered and there was an animal inside.

“It’s amazing to get a chance to see a wolverine in the wild, let alone catch one. This was a once-in-a-lifetime experience.” – DWR Northern Region Wildlife Manager Jim Christensen

When DWR officials responded they had found they had captured the first wolverine ever in the state of Utah. At that point, officials brought the wolverine back to their Ogden office. Once there, officials sedated the animal. Once it was asleep they collected hair samples, checked the animal’s teeth, and took a series of measurements. Likewise, they took a blood sample from the animal. Lastly, they attached a GPS collar to the wolverine. This collar will allow biologists to better understand a Utah wolverine’s movements.

“It took only a couple of minutes for it to start waking up. Pretty soon, it was wide awake and as lively as ever.” – DWR Northern Region Wildlife Manager Jim Christensen

After the examination, the male wolverine was loaded back into the trap and woken up. After everything looked good with the animal biologist began the transport process. In the late afternoon of March 11th, biologists released the animal on public land near the North Slope Area of the Uinta Mountains.

So, what are your thoughts on this capture? Have you ever seen a wolverine in the wild before? Let us know in the comments!