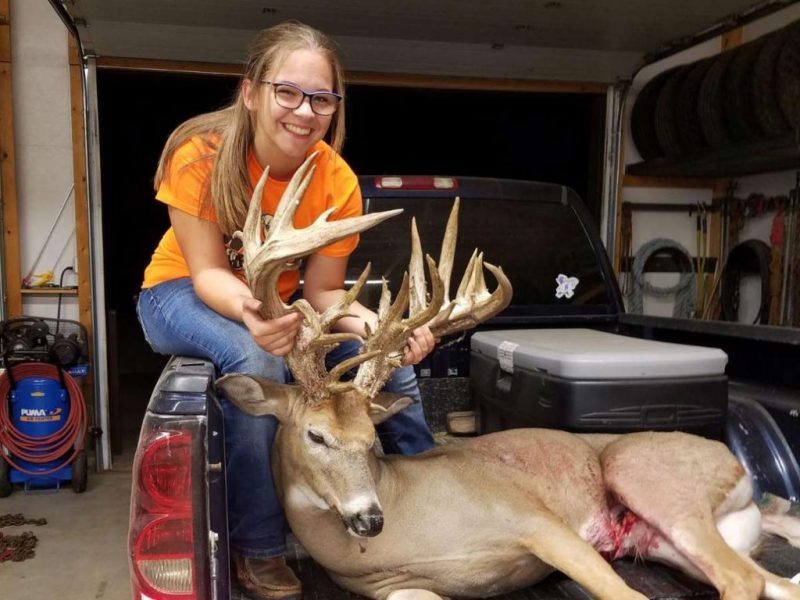 Paslie Werth, a teenage girl from Kansas, has taken a world record buck. On Sept. 6th, the second day of the youth deer season took the buck while hunting with her dad. They reached their stand that afternoon and had not even seen a deer. However, the massive buck had different plans. As the day pushed on into evening time, the buck suddenly stood up only 25 yards away from their stand. Paslie made the shot count and the rest is history.

“When we got the score, it was hard to wrap [our heads] around because none of us guessed it to be that much. And it was just very surprising, and I kinda couldn’t believe it. The trail camera pictures that we got did not do it justice.” – Paslie Werth

Once the buck was down and Werth and her dad approached him, that’s when they realized they had a special buck down. The buck has 42 scorable points and had incredible mass. After waiting the required 60-day drying period the buck was officially scored by the Boone and Crockett Club. With 7 4/8″ bases the incredible buck scored 271 4/8″ net. This score certified the buck as the largest non-typical whitetail taken by a female in the world. Paslie is also currently the youngest non-typical whitetail record holder. Likewise, she has claimed the fifth-largest buck harvested by any method of any hunter in the state.

“My sister passed on the buck, and then my dad passed on it last year, because it was pretty broke up when he saw it. This year, was kinda just my year. It was very shocking when I got him.” – Paslie Werth

This amazing buck wasn’t just an unknown giant. The buck had been frequenting the family’s Kiowa county land. The family had been watching this buck grow for 3 years. Two years ago Paslie’s sister passed on the buck. Likewise, last year her dad also passed on the buck. He had broken some of his antlers so it was easier for him to pass on the buck. But, this year everything came together for Paslie to take a world record buck. Paslie is proud of her hunting record. However, she says what’s most important was to be able to share the moment with her dad.

“Being with my dad and as soon as I shot it, and we got out of the blind, and we got to it. We were so happy then, and that was probably the best moment of it. Being able to share the experience with my dad, it was just really fun.” – Paslie Werth

So, what are your thoughts on Paslie’s buck? Have you ever seen a buck close to this size? Let us know in the comments!