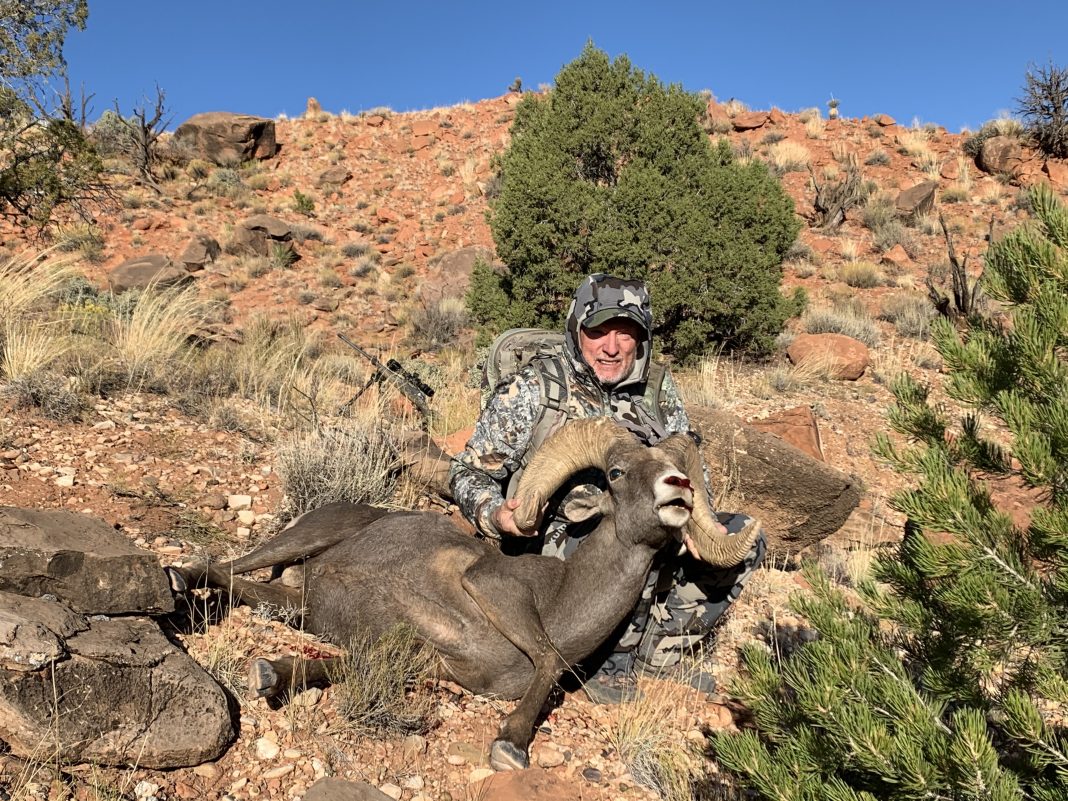 Year after year, the same email or notice came, “UNSUCCESSFUL,” for my coveted Utah desert bighorn sheep tag. The last few years, knowing I was in the upper echelon of point holders, I had switched to putting in for the most popular units in the State, giving up the guarantee of drawing other units with lesser quality sheep.

Finally, with 24 points, I was nearing being able to draw almost any tag in Utah. I reached out to several people with sheep knowledge in Utah, including Randy Johnson, one of the most reputable and successful sheep guides in Utah. I also consulted a good friend of mine, Ryan Hatch. Both Randy and Ryan discouraged me from putting in for the Zion sheep unit and told me the Kaparowitz West tag would be a better tag, because of the decline in the quality on the Zion recently. That was enough for me.

Knowing I wasn’t guaranteed the Kap West tag, but still hopeful, I talked with a couple of guys I knew who had drawn the tag a couple of years earlier. They were excited about the possibilities of my being able to draw it.

Fast-forward a couple of months after application, and I received the word, “SUCCESSFUL,” on my Kap West sheep application. Over the next few weeks, I began a training plan to get in physical shape, and I continued trying to learn as much about sheep and my unit as possible. The first people I called were Randy and Ryan, and I made arrangements to meet Randy at his home. Ryan told me, he had drawn the same tag, and that he would let his daughter use his tag under the youth mentoring program.

When I met Randy for the first time, well before the draw, I had told him I would love to be able to hunt with him, but financially, I just could not afford his services. He was okay with that and told me he would still help me any way he could. When I met him at his home, I wanted to hunt with him even more. He is the sort of guy, who drew me in with his sincerity, honesty, integrity, success, and knowledge. Before I left his home, he had given me three or four places to begin to look for sheep.

I continued to maintain communications with Randy and Ryan, as I began to scout, and over the next three months, I would learn the beauty of the desert and what it held, that I had never seen before. Six, 600 mile round trips and 18 days of scouting gave me a good base for my hunt. I saw numerous rams and herds of sheep, but only one ram, a nice 168” chip-horned ram, piqued my interest as a shooter, during my scouting time.

I showed up for my hunt a couple of days early and continued to scout. Then I checked a couple places I hadn’t looked at yet, and saw a nice herd, with some decent rams in it, but no whoppers. The help that I had hoped for, ended up going with someone else in the same unit opening weekend, so I found myself on the mountain solo hunting, something I hadn’t planned on, and frankly, something that was very disappointing, if not depressing. 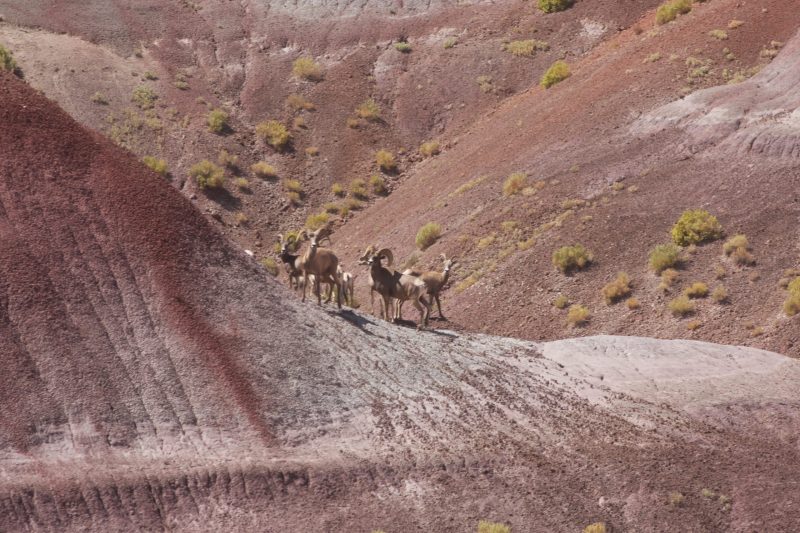 I hunted for the chip horned ram opening day, but it was killed farther down and on the other side of the canyon I was hunting by an older gentleman, who had hired a guide. I knew of four sheep taken opening weekend, including a record book ram, taken by Ryan Hatch’s daughter, Hayley. Ryan took me to where his daughter had hunted, where there had been a couple of other shooter rams. One really nice ram showed up, but not what we wanted for sure, and not in a spot, we could get to before he disappeared.

During my hunt, I had a few friends, family, and especially my wife, Sandra pound the red rock, sand, and cactus with me. I had numerous opportunities to take nice respectable sheep. My son and I were rim hiking one morning and stopped to glass a canyon. We noticed a nice ram sleeping directly below us at thirty yards. My wife and I had checked a canyon we could drive into, where we saw three mature rams and some ewes, but nothing I wanted yet. I had been told by Ryan Hatch, there had been a no-brainer shooter in that area before the hunt, but two trips in there didn’t turn him up. I pounded many areas of the unit and saw many decent rams.

Finally, on hunting day seventeen. I had plenty of help show up, my son and grandson, brother, my brother’s son-in-law, and his father. I decided we would go back into the canyon I had seen the three mature rams. To the place that no-brainer was supposed to be.

My help all drove the three hundred miles early in the morning to help me and arrived by midnight. As we drove up the canyon, I told them the ridge points, I thought they should hike to, and I went on another half mile. I hiked up the bottom, looking ahead to where I wanted to go. After hiking to a ridge and glassing everything up. I decided I needed to be a bit higher, so I started up the ridge. I stopped to glass once again and spotted a white spot above me, but it didn’t register what it was. After glassing more, and back to the white spot, I found it had moved and was obviously a sheep. Just then a ewe stepped out, and a small ram moved across the ridge behind and above her.

The wind was blowing horribly and was crazy cold. While watching the sheep, my grandson Ty had sneaked up and startled me. He and his dad had spotted a herd of seven, with a few rams in it. I told him I needed to continue up the ridge to check the sheep above me. I wanted to do that before going to see what he had seen. Turns out, the sheep they had spotted, were the same ones above me.  They had spotted them from a different angle, and my son’s phone scope videoed what transpired the next few minutes.

We slowly crept up the ridge, to get in a better position. We neared a cedar tree on the crest of the ridge we were on; I could see sheep across the draw and on the next face. Spotting a decent ram, I lowered the legs of my bipod and got set up under the cedar tree. The first ram was nice, but just behind him was the no-brainer…

He was behind another cedar and seemed to just wait until the first ram moved a few feet. At which point the no-brainer moved into position, broadside to me. I was down and ready for the shot. My entire hunt seemed to flash before me, and I wondered if I was really ready to end it all. I knew this was a good ram, and with my grandson in my hind pocket, my trigger finger took charge. One quick shot to the heart, my ram tipped over backward and was done. 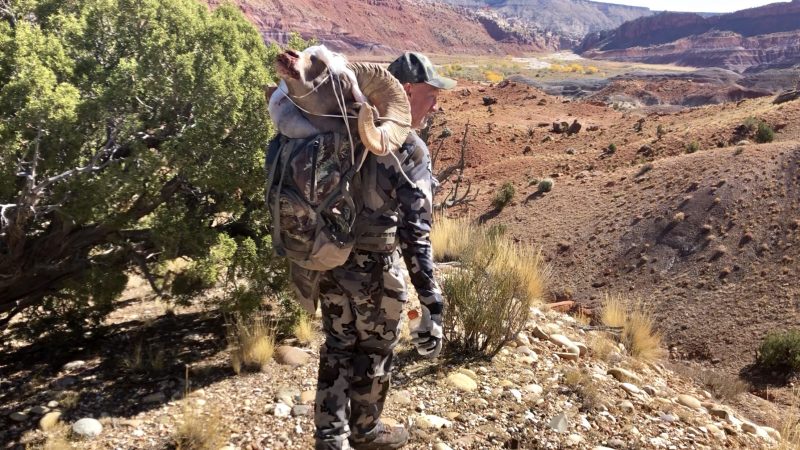 With the shot, everyone made their way to us. I was happy to have finally done it. We took multiple photos, videos, and gave high five’s. All that was left was cape him out, quarter him up, and pack him out. Honestly, it was a melancholy moment, as my success, which had taken twenty-five years, was over all too quickly. The moment I had waited for was here, and yet, I didn’t want it to end. I still had 2 ½ weeks before the season ended. The hunt this 66-year old man had spent so much time and energy on had come to an abrupt end. I have hunted and taken deer, elk, pronghorn, bear, and moose, but I am hooked on sheep. They are incredibly special animals. I think one has to hunt them, to understand it.

One final shout-out to those who helped me at some point during my scouting and hunt, in no particular order. My wife Sandra, my son and grandson, Matt and Ty Haskell, my son-in-law, Jeremy Gee, Randy Johnson, Ryan Hatch, Bill Beck, Bruce Peery, Clair Carter, Deon Mecham, my brother, Steve Haskell, Martin, and Marcus Fox. Can’t wait to pay it forward.