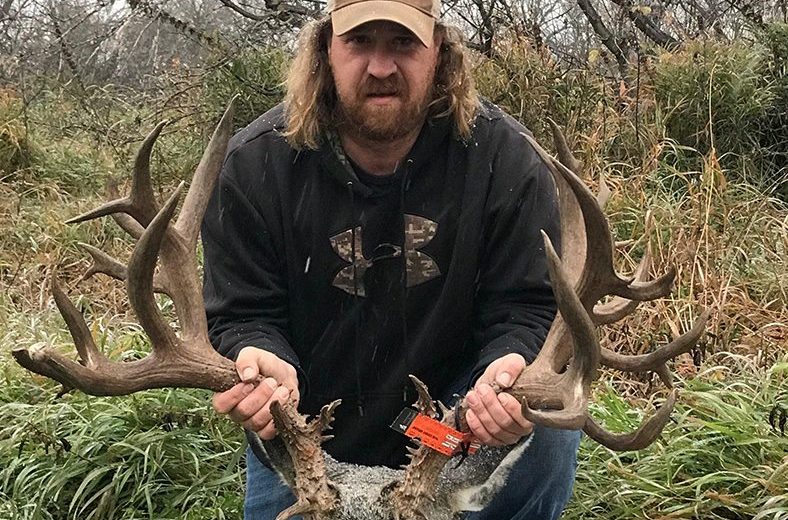 Dennis Bennett had seen a giant non-typical buck on and off before the hunt in 2018. After locating where the big buck was calling home Dennis decided it was time to try and make a play on the non-typical buck. Early in the morning on Oct. 1st Dennis began a stalk on the buck. Dennis had closed the distance to about 44 yards. However, the buck had not offered a shot at this point. Then heartbreak struck, a smaller buck that Dennis was unaware of spooked and scared the big buck away.

Bennett backed out of the area and hoped that the big buck wasn’t scared enough to leave the area for good. Dennis returned to the area later that afternoon and to his excitement, the big buck was nearby. The buck was bedded in a small wash that was covered in buck brush. The stalk was going to be about 300 yards and now the wind had changed and was going to allow Dennis a nice angle to stalk from.

Where the buck lay and the wind allowed Dennis to move out of sight along a fence line down the ridge. The stalk allowed Bennett to end up at 37 yards from the giant non-typical. The shot was at a steep downhill angle but Dennis felt like he could make the shot. About that time the non-typical got up from its bed and began feeding below Dennis. He came to full draw, took aim, and let the arrow fly. The arrow hit high because of the steep angle and dropped the bucks in its tracks.

The buck rolled about 50 yards downhill before settling at its final resting place. As Dennis approached it became obvious that he had taken a once-in multiple lifetimes type animal.

The non-typical has a 5 by 5 typical frame with 15 abnormal points on each side. The buck was gross scored at 303 0/8″. On January 9th, 2019, the Pope and Young Club convened a Special Panel of Judges in Regina, Saskatchewan. During that meeting, they confirmed Dennis’ buck to be the new Pope & Young world record non-typical mule deer with a final net score of 291 1/8″. This buck outdoes the old record taken in 1987 by 16 2/8″.

While this buck was taken pretty dang recently, he will definitely go down as a legend. If you’d like to check out more legends like this buck, click here.

What do you think of this world record buck? Have you ever taken a record book animal? If you have let us know we would love to see it! 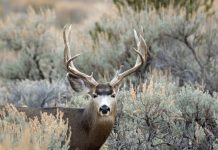