Oregon Department of Fish and Wildlife (ODFW) is opening the door to wolf hunting and trapping. ODFW proposed a new wolf plan to manage the increasing number of wolves in the state. Biologists counted 137 wolves this winter which was a 10% increase from last year. With the increased number of wolves, have come more livestock depredation incidents.

The Fish and Wildlife Commission is expected to vote on the Plan at its June 7 meeting in Salem.

Once adopted, the Plan will be the third edition of the Wolf Plan, which was first adopted in 2005 after an extensive public process and revised in 2010.

The draft Plan incorporates ideas where consensus was reached, but an agreement was not possible on all topics. See a report on the facilitated meetings’ outcomes here.

“Wolf management is a polarizing topic with strong views on all sides, so it’s tough to find consensus,” says Derek Broman, ODFW carnivore and furbearer program coordinator. “But regardless of people’s views on wolves, the wolf population in Oregon is growing in size, the number of packs and packs reproducing while expanding its range.”

Like the original Plan, the Draft Plan would allow controlled take only in Phase 3 (currently eastern Oregon.) When wolves are a major cause of ungulate populations not meeting established management objectives or herd management goals.

Other major topics addressed in Plan include:

Public testimony on the draft Plan will be taken during the June 7 meeting and can also be sent to odfw.commission@state.or.us  Emails sent by May 23 will be included with staff proposal as part of the review materials shared with Commissioners prior to the meeting. 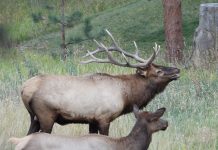