Popeye was known for his width, tipping the tape at over 42″ wide. Morty was known for his mass. This is one of the better pics we have of Morty’s Mass. He carries his mass throughout all his points.  Morty called Western Wyoming home. You can see how he put on his mass over the years in a great video series, called Extreme Bucks. (Filmed by Rod Eastman, John Kocheaver, and Al Ellis). The videos are hard to find (check eBay) but well worth the effort.  They first filmed Morty when he was a 200″ non-typical. Then found him on the same ridge the next year when he put on an easy 30″.

Did any of you have a chance to see Morty alive? Let us know in the comments!

Legends Never Die is dedicated to bringing back the memories of bucks from the past that are “Legendary.” We have all seen photos of giant bucks from back in the hay day, and with jaws dropped open, have only dreamt about the chance at a buck of a lifetime like that. In this segment, you will see never before seen photos of Legendary deer like Popeye, Morty, King Crab and many more.  This series of photos were taken by A.Ellis from 1989-1994 and brought back to life by us at www.ehuntr.com 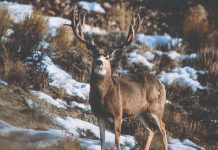 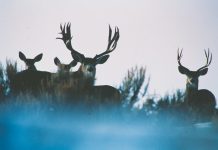 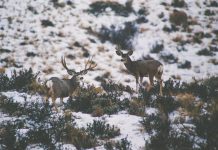