Montana has a lot of wildlife legislation and regulation changes going on this year. You can now add to that list House Bill 390, which would make certain special hunting licenses once-in-a-lifetime harvest.

The bill states, “A person who has killed or taken any game animal, except a deer, elk, or an antelope, during the current license year is not permitted to receive a special license under this chapter to hunt or kill a second game animal of the same species. A person may take only one of each of the following species in Montana in that person’s lifetime.” The species listed are grizzly bear, antlered moose, ram mountain sheep, and mountain goat.

The exceptions to this rule are ewe mountain sheep and antlerless moose. It also excludes the “limited mountain sheep license” which can only be drawn every 7 years.

It also states that youth cannot apply for these special hunting licenses. They can, however, still apply for antlerless moose and ewe mountain sheep.

The bill was scheduled to be heard by the Montana Fish, Wildlife and Parks Committee yesterday, February 26th, at 3 PM. No Updates as of today. If passed, the bill would take effect March 1st of 2020.

Do you think this is a smart conservation move for the state of Montana? Or are they setting themselves up for overpopulation? 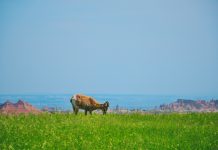