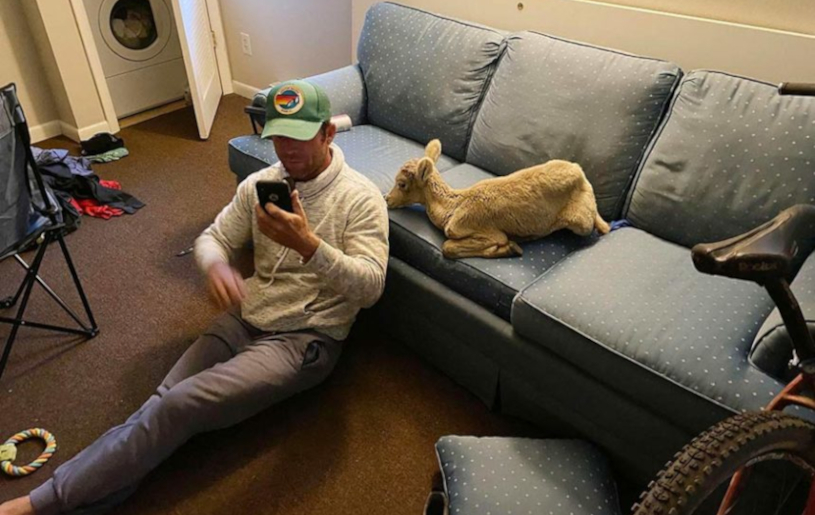 A man found and took home a bighorn sheep lamb recently. The man is a short-term Wyoming resident from Florida. The bighorn sheep lamb was found north of Jackson, Wyoming. The man stated that the lamb was acting “funky” when he first saw it. As a result, the man decided to approach the lamb.

After spending a few minutes with the sheep the man decided to take it to the local Wyoming Game and Fish Department office. However, when the man arrived at the office he found that the office was closed for the weekend. At that point, the man decided to take the lamb back to his residence. Soon after arriving home, photos made the rounds of the man with the bighorn sheep on his couch. At that point, friends contacted the man and told him to take the animal back to where he found it ASAP. The man then loaded the young sheep up and took the sheep back to the area near the National Elk Refuge boundary where he found the lamb.

A Warning For Removing The Lamb

Sometime later Wyoming Game and Fish Department game warden Kyle Lash started receiving reports of a possible illegal animal possession. Lash made contact with the man to see what had taken place. Lash had been told that the man had taken the animal as a stunt to impress friends. However, after reviewing the incident and video evidence the warden found no evidence of purposeful wrongdoing.

“To be consistent with past cases, a warning was issued on this since I couldn’t prove the malicious act. I said, ‘What happened?’ and he said, ‘I think it lost its mom.’” – Game Warden Kyle Lash

The man showed Lash a video of him returning the sheep to the area and felt he was trying his best to save the animal. However, as stated above the man was issued a warning about taking wildlife from their habitat.

“He showed me a video of him releasing it, saying, ‘Go find your mother!’ I was able to determine he had possession of it for about an hour and a half.” – Game Warden Kyle Lash

Lash says that calls about people taking young or baby wildlife are common. He thinks it’s almost human nature to try and take the young and “help” them when they are found alone. However, Lash says people need to remember to leave them alone when they find them. Most of the time their mother is not far off and it can make the situation much worse.

The man has since reported that he was fired from his job and was removed from his temporary housing in the aftermath after the photos and videos surfaced.

What do you think of this man taking the lamb? Do you think he should have only received a warning? Let us know in the comments!