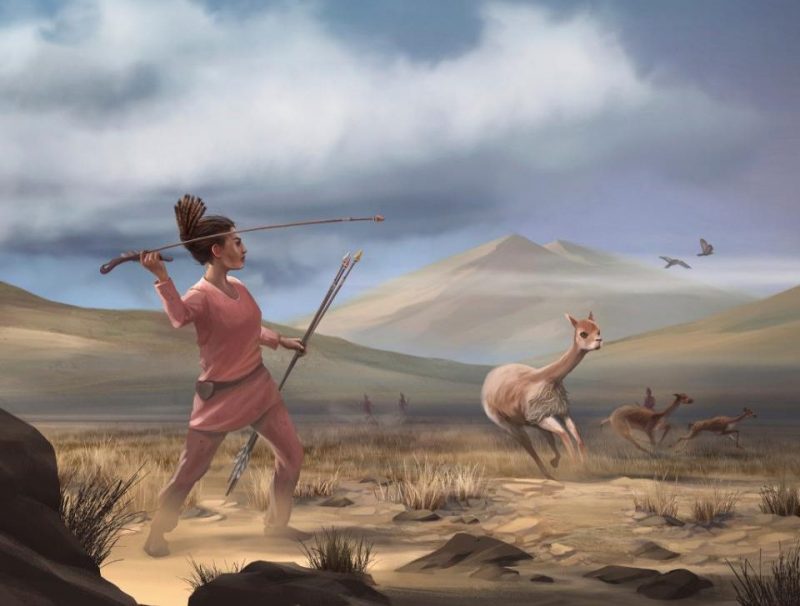 9,000-year-old female remains prove that women were hunters during the Ice Age. The burial, found in the Andes Mountains of South America, reveals that female hunters were more common than previously thought. Recently, the activity of hunting has seen an increase in women hunters. It seems now this may be a return to the norm rather than something new.

9,000 years ago a female hunter was laid to rest near a high-altitude site called Wilamaya Patjxa in what is now Peru. During the scientific excavation, researchers found the woman was buried with a hunting tool kit complete with animal-processing tools and a full suite of projectile points. In most instances, Ice Age peoples are buried with their most prized possessions. After DNA and protein testing confirmed that the person was in fact a woman, researchers began looking for other female hunter remains.

Researchers began scouring records of late Pleistocene and early Holocene burials. After searching they identified twenty-seven individuals that had hunting tools buried with them. Of those twenty-seven people, eleven were female and fifteen were male. Those statistics show that it is likely 30%-50% of the population were female hunters. This level of women hunting is in stark contrast to recent hunter-gatherer cultures. Likewise, this is a much higher rate of female hunters than current hunting statistics as well.

Over recent history, hunting has been overwhelming a male-dominated activity. However, in this writer’s opinion, this makes sense. Ice Age peoples were extremely nomadic and their primary food sources were the booming wildlife population. It would be several hundred years before American Ice Age peoples would find fertile enough lands to accommodate any agricultural practices. It seems very likely that able-bodied men and women would hunt together. Hunting parties would have probably used anyone that was able. Surviving in a “new” unexplored world would have taken the entire population.

This discovery raises so new questions, questions the team hopes to look into. The researchers hope to find how the sexual division of labor and its consequences in different times and places changed. Likewise, they want to look at the differences in gender roles and culture between hunter-gatherer populations in the Americas.

What are your thoughts on Ice Age women being hunters? Have you ever heard about Ice Agre remains being found in your area? Let us know in the comments!