My buddy, Tranquilizer (or Tranq for short) was due to arrive September 21, 2013. He had been doing quite a bit of hiking the 2 years prior. Spent most of a year backpacking in New Zealand. Though he’s done his fair share of hiking, he hasn’t been on a hunting expedition yet. If I could get him onto a goat, it would be the second animal he’s taken.

Tranq arrived at 1 pm on September 21 as planned. We quickly went over our gear and then we bailed. The first day was a hard hike in that ended in setting up a make-shift camp in the middle of the trail. On day two, we reached the spot we wanted to camp and immediately got into goats, seeing 12 in total.

On day three, the real action started. We worked our way up to some game trails towards a goat up behind camp. Finally, we were at 206 yards. I told Tranquilizer to use his pack as a rest on the rock and don’t shoot until I say so. I set up the spotting scope and got behind it. Still unsure if it was a billy or nanny. After half an hour or so, it turned and took a step revealing it was obviously a female. This is when I learned goats are somewhat like bears. Males have a small rump, while females have that big ol’ goat-oh booty.

Even though it isn’t illegal to take a nanny in the area, it’s not recommended. She was a big lady, but I wouldn’t let Tranq shoot a nanny either way.

So we decided to change plans. We set up the spotting scope, started glassing, and boiled up some water and made a hot emergen-c. I wasn’t really paying attention. We were soaked, cold and now sleet was coming down hard.

Tranq was asking about what the weather would do to the goats’ behavior. I told him they’d just be doing their thing. So I turned around and right away spotted a goat. Then another and another. Lots of nannies paired up with kids. Then two more came off a ledge. Another nanny and kid. The goats were getting pushed down.

I spotted another lone goat up on a bluff. I watched through the spotting scope the best I could through the sleet and fog. All of a sudden, I got the albino kiwis in the eyes. BINGO! I looked at Tranq.

The black part of a goat’s ear is average 3”. If the horn is 3 times as long as the black patch in the ear, you have a 9-inch goat. A 9-inch goat is a good goat. Mature billies will also have a horse-shaped face, with a slight roman nose. If you’re looking head-on, the bases of the horns will almost touch on a good goat.

“He’s a billy. But he’s young, still has a short dished face. He’s probably only 7 or 8 inches in the horns” I told Tranq.

His reply was “I came for the adventure. We can make a play on him. If we get him great, I just want the meat if possible. I’m over being soaked and cold, but if I go home empty handed I’m still happy”. 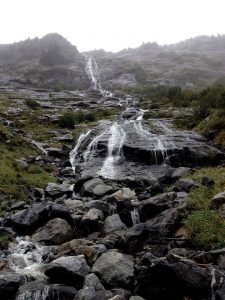 Good enough for me. We studied the terrain and where he was to figure out a game plan. As we were making our approach the nannies and kids started to make their way up higher. The billy was now with another goat and crossed to the far side of a waterfall we were working up.

We crossed the waterfall and made a desperation play of going straight up from below them. We got behind a big rock and peeked around it, up to the goats. I went for my rangefinder. Turns out I lost it between making a hot drink and climbing. I was looking at them trying to figure out our next move. The goats were very aware of us.

Then I heard “I can make that shot”. I looked at Tranq and then back to the goats. “What the hell,” I thought. “Ok move those rocks, put your pack on the big rock for a rest” as I was setting up the spotting scope on another rock. Tranquilizer was getting a little excited “I want to take the shot before they move”.

“They feel safe, we have time,” I told him. “line up the shot but don’t touch the trigger until I tell you”. So he unstrapped Selena, my Weatherby vanguard 30_06 from his pack and lined up. I was watching the goats through the scope. Sleet was still coming down hard and trying to watch them was tough. Trying to see them through the sleet and my body heat kept fogging up the eyepiece on my spotter. Finally, I got the green light from the goats.

“Ok, DON’T touch the trigger yet. Not until I tell you. Turn the safety off. You’re going to take the goat on the left”. I looked over at tranquilizer and he gave me the nod. “Settle in and get steady,” I told him. The goat was standing face on looking right down at us. “Put the crosshairs right on his nose, when he looks at the other goat let one fly”. All of a sudden the goat turned his head and Selena sang. A 165-grain GMX was cruising through the air.

Through the spotter, I saw the goat drop his right shoulder. I heard Tranquilizer cycle the action. “Crosshairs on the left shoulder and hit him again,” I said. I didn’t hear it but felt the concussion of the rifle’s sweet Georgia brown. Through the spotter, I could see a solid impact on the goat. “Hold on! Just watch him” I said.

The goat staggered, then reared up and jumped off the bluff. It only went down one ledge.

Stay tuned for MOUNTAIN GOAT EXPLOITS: DO OR DIE 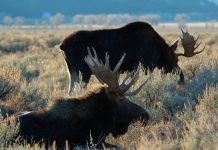