QK, as I’ll call him, got a hold of me on a certain hunting forum. He wanted to do some sort of mountain mission. We both picked out a couple of spots to check out and ended up settling on one he picked. After only a little bit of planning, it was set we’d head out to explore on an August long weekend for general open season goats. Neither of us really knew anything about the area, but it looked good on Google Earth.

After a short drive to the trailhead and a three-hour hike, we were at camp. We got settled in and then busted out the spotting scope and binos. It wasn’t long until I had a nanny and a kid picked out in the scope, followed by a billy. We then started checking the terrain and discussing game plans for the morning. The next day we saw the billy not far from where he had bedded the night before. We got up the other side of the valley and played the terrain the best we could. We peeked over a moraine and he was gone. It was already scorching out. We thought he may have worked his way into some shade to cool off and bed down. We hid for a few hours while glassing to see if he’d show himself again. No such luck.

Some time went by and we decided to get to higher ground to see if we could get a better vantage point or if he made his way over the peak. We climbed up to a saddle between two peaks and came across some serious goat trails and some goat down to boot. We spent several hours watching to see if something would move, but I think we were the only critters that were dumb enough to be moving around in 30-degree Celsius weather. 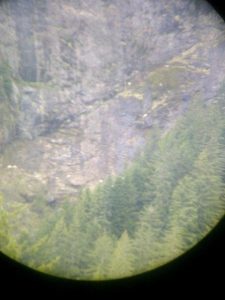 The next evening after a hot day of hunting, we decided to hit the ridge to the northwest of us to glass and cook up a snack. After we got settled QK asked, “I thought you were going to cook up that meal?” I told him, “I’m waiting a bit in case we have to make a play.” He replied with, “Good idea… if we were cooking, then the goat alarm would go off”.

After half an hour, I busted out the stove and the Hi-Mountain Cajun beans and rice. As I cooked we both glassed. I spotted a nanny and her kid who disappeared over the ridge. We decided that if a billy came out, we would move down one more ridge to close some distance.

We worked our way along a cliff face, all while keeping our eye on the draws and cliffs in case something was watching us. Just as we came around the corner of where we had spotted the kid, we spotted 2 nannies and 2 kids bailing up the hill at about 150 yards. This was the closest I’ve ever been to mountain goats that weren’t on the side of a highway. This was also the first time I learned how quickly they could cover some nasty and steep country.

The season was far from done though, and we would punch 2 tags before it was over. 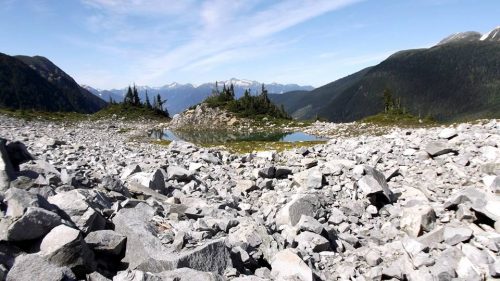