Like a grand slam in baseball, the wild turkey grand slam is highly coveted, hard to accomplish, and somewhat of a rare occurrence. It consists of killing one of each of the four subspecies of the wild turkey in the United States, which include the Eastern, the Rio Grande, the Merriam’s, and the Osceola. Tackling the grand slam can be rewarding, adventurous, memorable, costly, intimidating, and, most importantly, fun!

One of the best parts of completing the grand slam is the adventure of traveling to other parts of the country which you probably would never visit otherwise. My hunts have taken me to see the Great Plains in some of the fly-over states, some gorgeous high country chasing Merriam’s in the west, and next month (around the time this article will be published) to the swamps of central Florida. The quest for my slam has taken me to Mount Rushmore, Devil’s Tower, the Badlands, and even the world’s largest ball of twine!

In addition to all of the scenery and landmarks you will take in while traveling the country, having the opportunity to immerse yourself in the different habitats that the other subspecies of birds call home, and the other wildlife that they share these habitats with, is a great reward in itself. While I still enjoy seeing white tails while hunting Easterns back home, it is quite a thrill to be working a bird and see an elk herd slipping through the aspen timber, watch pheasants cackling and displaying on a hilltop while the sun rises across an immense prairie, or come across a fresh set of mountain lion tracks in a dusting of snow! 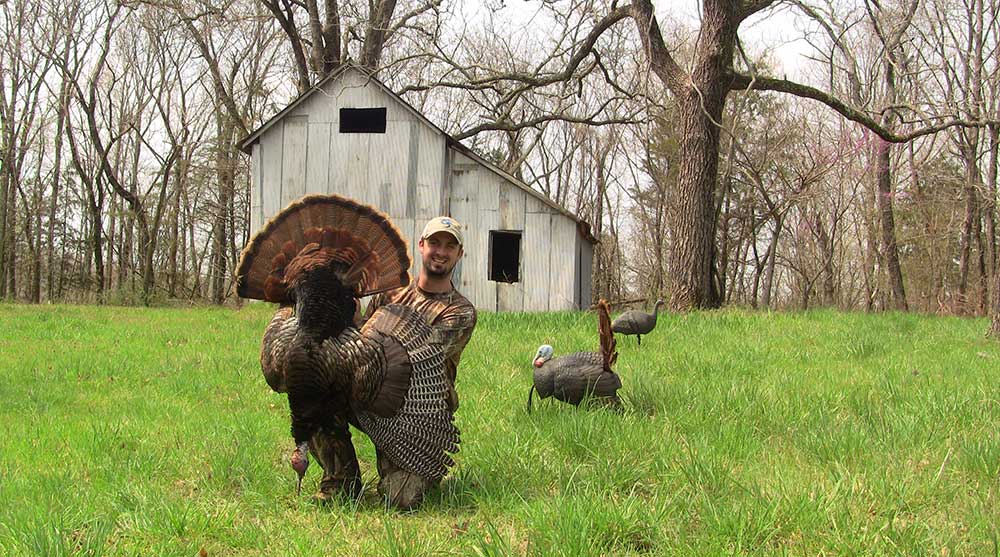 An out-of-state hunt can be whatever you make it. It can be done on a tight budget or be as extravagant as one pleases. The slam chaser has many choices and decisions to make when starting the process of planning the hunt. Some of the choices include outfitted hunts versus DIY hunts, public land versus private land, camp versus hotel, and even cooking your own meals versus eating in restaurants. There are plenty of great outfitters out there that will gladly take your money and put you on birds (with very high success rates), but for the DIY guys like us here at Earned, turkeys are the perfect critter to go out, find, and hunt yourself. They are very vocal animals, widely distributed, and occur in high densities throughout most of their range. So, for the guy like me, who is willing to camp, cook his own food, hunt pressured public land birds, and do some door knocking to try to gain private access, an out-of-state hunt can be accomplished without making the pocketbook too much lighter.

Initially, the traveling and planning part of these hunts can be intimidating and seemingly too costly to the turkey hunter that has yet to chase gobblers outside his state. With today’s online resources, such as in-depth State agency websites, online forums, Google Earth, and the National Wild Turkey Federation’s (NWTF) very informative website, an-out-of-state hunt can easily be planned out well in advance, from the comfort of your keyboard at home. Tags and licenses for all four subspecies can be purchased over the counter (in many states) and normally for a fraction of the cost of other big game animals. Every state has different rules and regulations, but most State agency websites are easy to navigate, and with a little research, you can find the hunt that fits you!

Once you decide which type of bird you want to pursue and where that bird calls home, you can start narrowing down in which state you want to hunt that bird. Browse the different State websites, and find a season date, license fee, bag limit, and, most importantly, turkey population that you like. From there, study the regulations of the state you choose, call and talk with biologists and/or wardens, get online and ask other hunters/search through Internet forums about general areas, obtain property ownership maps to find private versus public land, and study maps and Google Earth to find good-looking habitat. By then, you should have it narrowed down to a few locations. Then you show up and start burning boot leather and find turkeys!

There are turkeys in every state except Alaska, so let’s take a look at where you can go to take each of these subspecies:

We’ll start with the most common and widely distributed of the subspecies; the Eastern. Found in 38 states, roughly from a line extending from north to south, through the middle of the country, all the way to the East Coast. Being from Missouri, this is the bird I grew up hunting and is from where my turkey hunting roots stem. Due to them living in more populated areas of the country, they receive more hunting pressure than their western counterparts, and from my experience, this makes them a little more call shy and reluctant to come running in to a caller. However, with widespread populations, high densities, and a plethora of State and public lands from which to choose, finding an Eastern to wrap a tag around should not be too difficult.

Next up is the Rio Grande. This is the second most widely distributed of the four, ranging from Texas to Nebraska and having scattered populations all through the west, including Hawaii. Rios live in more dry and arid habitats. These are notoriously fun birds to hunt. They receive little pressure compared to the birds to their east, and they occur in high densities almost anywhere they are found. I find the limiting factor, and when searching for Rio hunts, I look for roost timber. If you find a good timbered river or creek drainage, surrounded by agricultural fields, you could be into the turkey hunt of a lifetime. I have seen (more like heard about) a section of creek drainage that had gobblers roosted as far up and down as I could hear. There was a wave of gobbling action that would start at one end and end 20 seconds later at the other. With some state’s seasons starting early in the spring, it is not uncommon to be hunting big winter flocks, of up to 100 birds, as they are breaking up into smaller flocks. 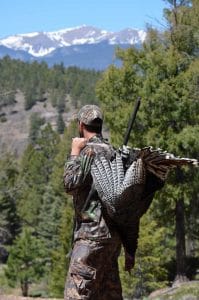 My favorite, of the three birds I have hunted, is the Merriam’s. This bird is highly recognizable due to its almost white coloration on the tips of its tail fan, which are absolutely beautiful to see strutting across a green meadow or through a stand of ponderosa pine. This is the mountain bird, which lives at higher elevations. They can be found in most western states that have high country. While these birds might be harder to come by than an Eastern or Rio, due to their isolated range, they can make for absolutely incredible hunts. For one, the scenery is always gorgeous, and secondly, in many places, they receive little hunting pressure, making birds fun to work and relatively easy to call in. A Merriam’s will travel a long way to come to a call. A tip I have learned hunting these birds is, hunt them later in the season. Earlier in the season, they will be concentrated at lower elevations, which is usually private property, due to snow up high. As the snow melts later in the season, they will move up to higher elevation and be more accessible through public land. The hunting pressure also seems to drop off significantly later in the season, and most hens are already nesting, leaving gobblers lonely and ready to come running to a call.

Last but not least is the hardest bird to come by, due to its very limited and isolated range, the Osceola. While I have not hunted this bird yet, I know, from planning my trip for next month and the research that accompanies the planning, that this bird is either going to be expensive to kill or going to take a lot of skill, hard work, determination, and luck! I’m hoping for the latter! Living only roughly south of the Florida panhandle, supply and demand make this bird a hot commodity. There are a lot of hunters trying to take an Osceola in a very limited space. The private landowners somewhat exploit this fact and aren’t afraid to make the hunter pay a good chunk of change for access or guided hunts, and for the people who don’t want to fork over the cash, the public land gets slammed with hunting pressure. I have narrowed down my search to a couple of Wildlife Management Areas and plan on covering a lot of ground, trying to find birds and get away from people.

Hopefully this article has inspired you to go explore some new country and try to take a new subspecies. Turkeys are the perfect medicine for the springtime blues we all get while waiting on next fall. If nothing else, it is a good excuse to get out into the woods, explore, scout new country for the fall, find some sheds, find some mushrooms, and have that spine-tingling thrill of a full strut longbeard walking down your sights! Good luck this spring. Be safe, and shoot straight!