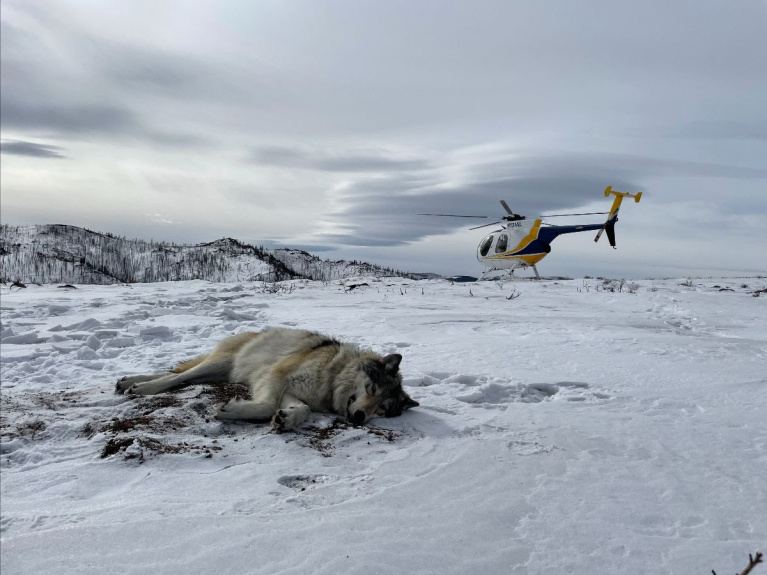 Colorado Parks and Wildlife officials caught a male wolf near North Park. Aerial contractors working with CPW spotted two wolves while flying the area. One of the wolves was already had a collar on and was identified as M1084. M1084 had shown up in Colorado back in 2019. However, the other wolf was unknown. Once the unknown wolf was spotted, the crew gave chase. After a short chase that took them across the Wyoming state line, the crew was able to capture the wolf.

Once the wolf was captured CPW officials began an inspection of the wolf. Likewise, the crew attached a new GPS collar to help track its movements. The hope is that this collared 4-year old male wolf will help CPW better understand where wolves go once they enter Colorado.

After being inspected by officials the 110-pound wolf was given the designation M2101. After being outfitted with the new GPS collar, M2101 was revived and released back into the North Park area.

“The advanced GPS collar will allow us to get a much better understanding of the animal’s movement, range, and behaviors.” – CPW Director Dan Prenzlow

Early last year CPW confirmed there was a resident pack of wolves in northwest Colorado, near the North Park area. At the time Gov. Jared Polis publicly declared wolves are welcome back in Colorado. We at Ehuntr even did a podcast with J.T. Romatzke of the CPW about the wolf pack in Colorado.

Wolves in Colorado are currently considered an endangered species by the state. Wolves may not be killed for any reason other than self-defense. Killing a wolf may result in criminal charges.

So, what are your thoughts on Colorado officials catching this wolf? Does your state have wolves? Let us know in the comments!