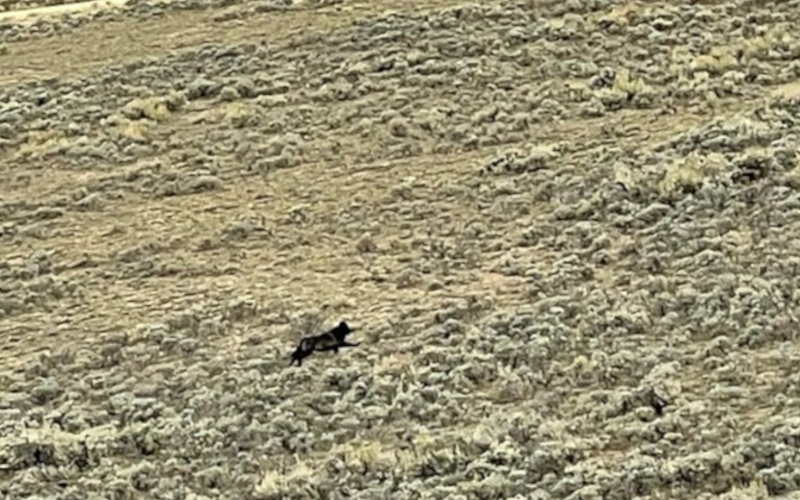 Chris Chirichetti II was traveling in Colorado’s Unit 6 when he and his girlfriend notices black objects moving through the sagebrush. Chirichetti thought the animals may be the new wolves in the area but he was unsure. It looked as though the animals were trailing or stalking some nearby livestock. The couple stopped and used binoculars to glass the animals. They watched what they believed to be wolves for several minutes. At that point, the wolves must have noticed the two people watching them and moved off.

Chris and his girlfriend followed in their vehicle and filmed the animals. After returning back from the hunt Chris posted the video on the Colorado Elk Hunters Facebook group page asking if other people thought the animals were wolves? Many of the comments agreed with Chris’ thoughts. After that Chris got in touch with a biologist at Colorado Parks and Wildlife. After showing the video to the biologist it was confirmed that the animals in the video were indeed wolves.

This is what Chris had to say about seeing the wolves.

“At first it was exhilaration to see them because I’ve never seen a wolf that close and especially because they aren’t really around here much. It was a pretty cool experience, and then it hit me they were running right where I was about to hunt.”

Chris said that his girlfriend was planning on dropping him off to elk hunt that day.

“She was going to drop me off at my hunting spot where I was going to backpack and tent for 10 days. I could only imagine what they were doing up in my hunting area. The hunting was so bad that I left the area a couple days to let it settle down, but I didn’t see one elk in the week I was hunting up there.”

The biologist believes the new wolves are the adult male known as (M2101) estimated to be 3 or 4 years old and a collared female (F1084) and their pack/pups. This is the first sighting of the wolves by a civilian. Likewise, this is the first known film of the new wolves. The two wolves started their own pack this June after they produced a group of new pups.

The CPW is excited about the film of these new wolves. However, they still ask that you report any wolf sightings or if you hear any wolves. You can report wolf information by clicking here. You can watch the video of these wolves by clicking here.

You can read more Colorado hunting news by checking out our page by clicking here.

What are your thoughts on the film of these new wolves? Have you seen any wolves in Colorado? Let us know in the comments!