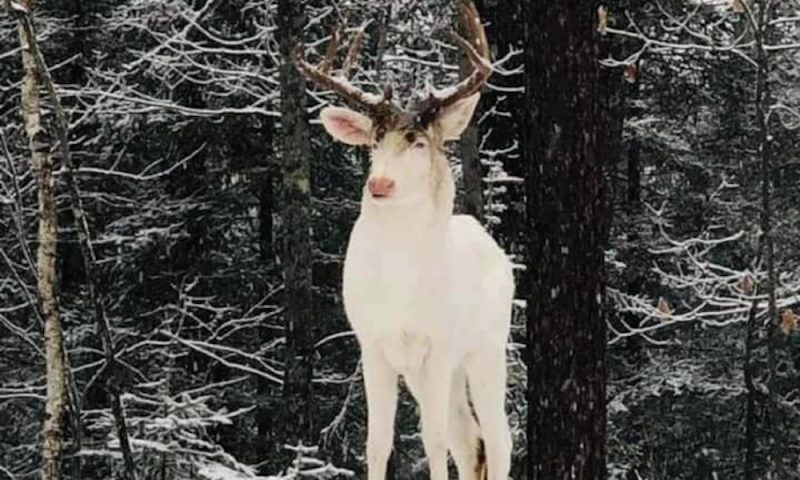 ALBINO DEER IN WISCONSIN – The gun season for Wisconsin began this past weekend.  It continues through this week and ends on November 29th.  Most hunters will be looking for the brown whitetail deer that inhabit the state.  However, what if an all white deer presented itself?  Could a hunter shoot it?

Prior to the beginning of gun season, a rare white deer was photographed in Wisconsin.  The deer was published on social media where it received a lot of attention.  One of the most popular comments on the picture was a post asking hunters not to shoot the deer.

“It is truly magnificent to see. I would hope any hunter seeing this would NOT shoot it. It is so much more beautiful alive than on your wall.”

The deer was truly a sight to be seen.  Most of the whitetail seen in Wisconsin are a light brown color, with white spots on their coat.  For Tracy Weese, who captured the image, the sighting was definitely once in a lifetime.

“An incredible sight to see here in Vilas County, a beautiful albino buck!” the agency wrote. “This majestic creature was spotted in the greater Boulder Junction area.”

Can the Albino Deer be Hunted?

The biggest question that came up after seeing the deer was, can he be hunted?  The hunting licenses issued in Wisconsin read “buck” or “doe”, depending on the sex of the animal.  However, according to the Wisconsin Department of Natural Resources, hunters are not allowed to harvest albino deer.  Sarah Hoye of the Wisconsin DNR stated the following regarding what classifies an albino deer:

“Albino and white deer which have a coat of all white hair except that the hair on the tarsal glands, head or parts of the head may be a color other than white. For the purposes of this paragraph, white hair that has been discolored or stained by blood, soil or similar materials shall continue to be considered white hair.”

If you were to legally harvest an albino deer, would you have it mounted?