Home Colorado 9 YEARS WAS WORTH IT I had been anticipating this hunt for months ever since I found out the news, my brother
and I had both drawn out to hunt Muley’s together in Colorado! This tag had taken 9 years of putting in to finally draw out.

The morning of the hunt my brother and I split up in separate vehicles in hopes of finding a big buck. At first light, my dad and I were glassing over a ridge as the radiant sun illuminated the sky turning fluorescent orange. My dad scanned a nice 4 point down a deep draw in the distance, who was chasing after some does in the rut. We tried to make a stalk on the buck by crouching and moving through the Colorado sagebrush.

The brisk cold morning air saturated the sagebrush and filled my lungs with excitement. As soon as I got down the ridge I could no longer find the buck we were after, so we continued hunting. Minutes later, I got a call from my brother. “I got my buck! He’s still got his velvet on too!” He said over the phone, I could hear the excitement in his voice. After 9 years of waiting, he had tagged out on a great 4 by 3 buck early opening morning.

Chasing Colorado Bucks in the Sagebrush

As the day rolled on, night approached as we continued to travel across dirt roads and glass the cedar tree lines in hopes for a nice buck. Suddenly, I looked to the left and saw huge beams sticking out above the sagebrush! I threw up my spotting scope on the window, could tell his horns were thick and he had nice eye guards. I couldn’t quite see his body, however, I saw 4 points on each side reaching high above the sagebrush.

As I exited the truck, my dad drove down the road to watch the stalk through his spotting scope. I snuck along through the sagebrush, trying to be as quiet as possible without spooking the doe’s that were surrounding the buck. I was about 300 yards away when the doe’s bolted up a steep rocky hillside, taking the buck with them.

“You should have stayed here! I had a huge 4 point walk 20 yards in front of me! He was so big, he had some sagebrush hanging off his horns!” – Aldan’s Dad

As discouragement kicked in, I did the walk of shame back to our white Chevy a few hundred yards away. Once I got back to the truck my dad leaned over to me, “You should have stayed here! I had a huge 4 point walk 20 yards in front of me! He was so big, he had some sagebrush hanging off his horns!” I couldn’t believe I had missed such an opportunity to get a nice buck. It could have been so easy! As the sun slid down the blue sky, stars began to emerge as we headed back to camp for the night in hopes of another opportunity in the morning. My 9 years of waiting would have to continue for another day.

Looking for a Halloween Buck

Halloween morning we rose early in the morning and drove down the highway towards our hunting area. Suddenly, I looked along a steep rocky ridge. The silhouette of a big bulky deer crested over the horizon as the sun slowly started to rise in the background. I could see sunlight reflect off the antlers as I threw up my bino’s and examined his rack. “That’s a nice buck!!”

I whispered to my dad. We began to make a game plan to get along that ridge to get after this buck. As we were debating a plan, the deer disappeared off the horizon. Frustrated on trying to find a way to get into the canyon we headed down dirt roads as I scanned ONX maps surveying public land. During the morning hunt, we never found that same deer we were pursuing.


The mid-afternoon found us taking a nap until the evening hunt. We awoke and began debating where we should go hunt for the evening, we agreed to go out by a draw we had hunted the previous night, feeling optimistic about the decision. I figured it might be a good option since I had seen signs all over and the area had multiple water holes.

As we drove along the dirt road, 5 does appeared out of the sagebrush. I knew there had to be a buck along with this group of does since the rut was firing up!! Sure enough, minutes later a 4 point emerged from the treeline and was following along the does trail. His tail was raised as he lifted his nose chasing after the does, what a sight! I threw my spotting scope up and examined his horns. Likewise, his bases were thick, with nice eye guards protruding well above his ears. “That’s a nice buck…I would shoot him!” My dad said as he looked at him through his binoculars. Debating in my head back and forth, I decided to let this buck walk, I was holding out for something bigger.

During the evening hunt, we scanned the hills and ridges driving down dirt roads. “Dad! Back up!!” I urged as I looked out my passenger side window. A group of does were feeding along a cliffside. At that point, I saw a nice Muley with deep forks and long eye guards following close behind. “That’s the one!” I said to my dad, as I reached for my 270 Winchester rifle. I crouched behind some sagebrush, trying to get a good vantage point of this buck as he stared at me from a distance.

Making a Move on a Halloween Monster

Gazing through my scope, I put the crosshairs right on his vitals. “BOOM!” The rifle rang out, to my despair, I could see dust behind him shoot out from the earth. I loaded in another cartridge, knowing I had missed. “BOOM!” the rifle rang out a second time, as I continued to watch the deer continue up the game trail. ‘How am I missing??’ I thought in my head. I loaded in the last round in the magazine, and shot one more time… “BOOM!” I had missed him again! I couldn’t believe it, I was in awe I could not hit this buck as he continued to go up along the hill!

My heart had dropped to the bottom of my stomach when I remembered I had one last round in my pocket that I had from hunting that morning. As fast as I could, I loaded my final chance into the chamber, praying I would get him. This time, I put the crosshairs right on the bottom of his vitals since I kept shooting over his back. “BOOM!” the rifle rang out. I watched him flinch a little as he continued to walk along the game trail up the hill. After 9 years of anticipation, I worried as the buck disappeared from view. I got up and sprinted as fast as I could back to our truck 100 yards away to grab more bullets.

A Buck Worthy of 9 Years of Waiting

As I returned to where I previously was, I glassed the ridge with my scope and there was no sign of the buck. My heart dropped again, the buck I had been searching and hunting so hard for was gone. Out of sight and it was all on me. I had missed the buck I had been searching for and dreaming about for 9 years. Anxious to see if he was anywhere around I climbed the steep rocky hillside, in hopes of catching him on the other side.

Out of breath, I stopped halfway up the steep boulder-filled ridge to catch my breath for a minute. As I looked to my left, there he was… “NO WAY!” I yelled at the top of my lungs. “LET’S GO!”Echoed throughout the canyon. I think every deer hunter in the state of Colorado heard me yell! The biggest buck of my life which I had waited 9 years to draw a tag for, right in front of my eyes! By far the best hunt I have ever had, which will forever be cherished in my heart. Nothing beats being in God’s Country building memories with those you love most. 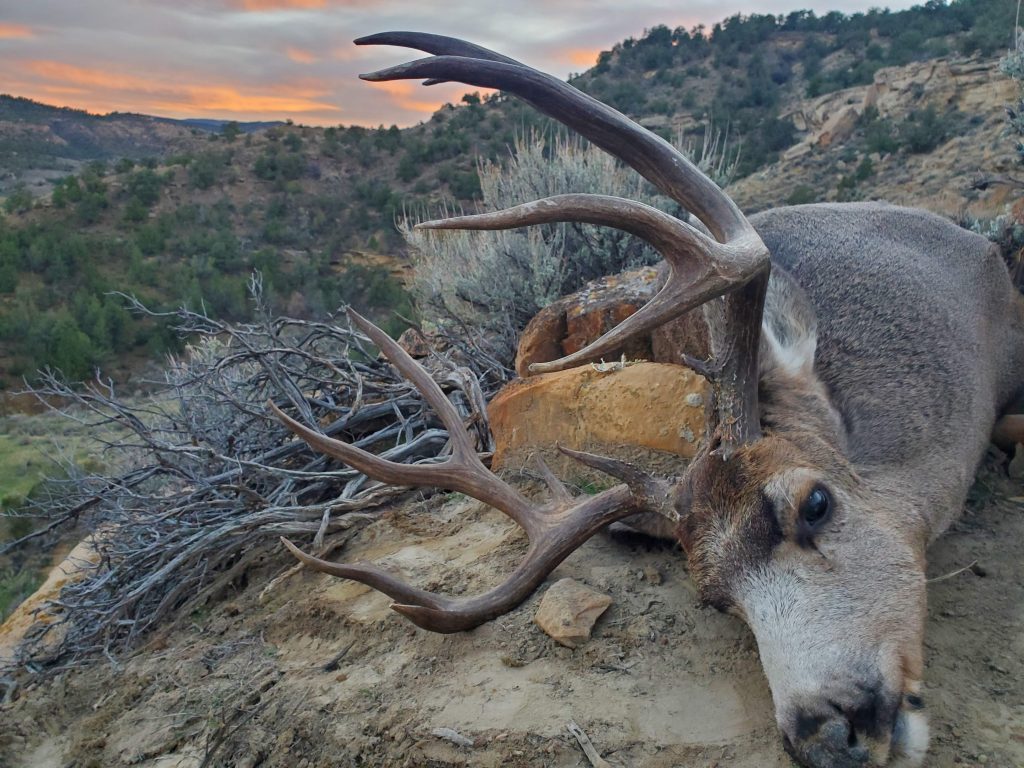 What an amazing story by our friend Aldan Bailey. Thanks for bringing us along during your hunt with this awesome story! Congrats again on taking an absolutely amazing buck after 9 years of applying! To top it off, you got to do it with your family which is what it’s all about. 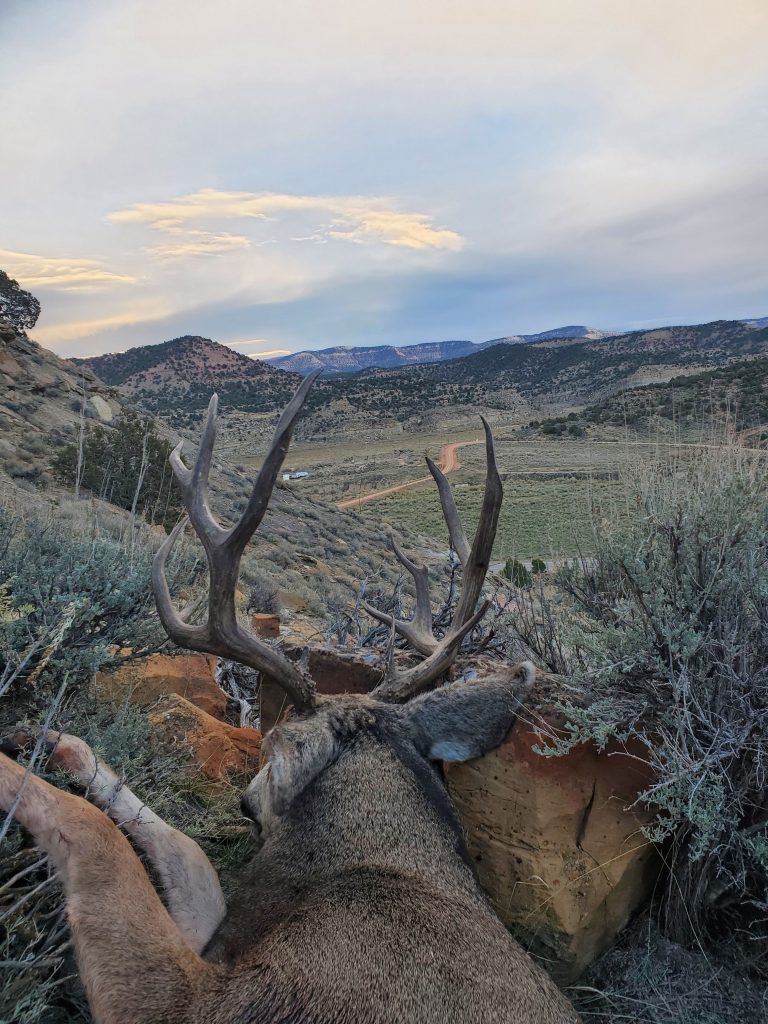 So, what are your thoughts on this awesome hunt from Aldan? Do you have a hunting story you’d like to share with us? Let us know in the comments!