Who doesn’t love a great deer story from their grandpa? My grandpa (Melvin Truman) was blessed to harvest several large deer in his lifetime, but none are bigger than his 44-inch wide mule deer that ended up winning the Golden Nugget’s Big Buck Contest back in the day.

I recently had the opportunity to listen to a recording of my grandpa telling the story of this deer, as well as many other deer stories. I thought I knew most of the story, but to listen to him tell it brought so many new and interesting points to the story.

In today’s post, I’d like to share the story of this amazing animal. Sadly, we no longer have the mount in the family. The man that owns it now has been great to send us pictures and allow us to call with any questions. At the time that Grandpa was telling this story, the mount was hanging in the Hurst/Ben Franklin store in St. George Utah.  I hope to one day, in the near future, make a replica of this deer and have it hang in my home.

I’ll try to keep some of grandpa’s lingo in the context to try and capture the story the way he told it.

Grandpa and his brothers had a guy from California that used to come and hunt with them. He made the trip out for about 9 years because he loved hunting with the Truman boys. His name was Chet.

On Wednesday, Chet and Grandpa tried to find a road that went around by Modena and came out at Stud Horse Flat. They ended up coming out at a different spot than they had intended, but they were still in the Stud Horse Flat area. They parked the pickup at the second wash by White Rock, near that big turn and started walking through the bare country towards Telegraph. All of a sudden they could hear this noise that sounded like falling water. It was a deer going across the shell rock. Grandpa said, “There he goes, let him have it.” Ol Chet went to jacking the shells into his gun, but grandpa knew the deer was going to get away, so he shot it. Just as he shot it, Chet got a shell in and shot. Grandpa said, “You got it”. Chet replied, “Oh I did?” It ended up being 9 on one side and 6 on the other. Chet was so tickled to get that deer that he took everyone out to dinner at Dick’s Café in St. George.

They ended up going camping out near that same area on Friday of that same week. The hunting crew consisted of Chet, Preston (grandpa’s brother), and grandpa. Grandpa went out to the state line and worked his way back past the windmill. He could see two bucks on the hillside, but he didn’t have a scope at the time. Only knew they were both big bucks. He aimed about what he thought was 2 feet above the bigger ones back and shot. They took off and he ended up taking 2 more shots at them. As he took off down the mountain to where they were, he cussed himself all the way down because he thought he had missed them. He went to where he thought he shot at them and found their tracks. In one of the tracks, he found blood. He followed the tracks for about 400 yards, and the big buck came out. He doesn’t remember looking down the sights or really looking at anything, but he pointed the gun in the general direction and fired. The deer took off, and grandpa took off after him. The buck went down to the bottom of the draw, and grandpa went up on the ridge. The deer ended up running about 200 yards or so away. Just before the deer went over a little pass, grandpa kneeled down and shot. He could see the front leg of the deer flip off.

down to the little pass that the deer went over, the deer had only made it about 100 yards into the sage flat and was actually walking back towards grandpa with its head shaking back and forth. Grandpa then sat down on his butt to try and shoot it in the neck. He ended up missing the horns by only about 4 inches or so, but he hit it in the neck and it went down. He went over to it to clean it out, and when he sat his gun there by its head, its antlers were wider than his gun was long. The deer was so big that he couldn’t hang it up in a tree, so he pulled it under a tree. He went to camp and Chet asked if it was grandpa doing all that shooting? Grandpa said, “Well I guess that was me. I didn’t hear anyone else shooting.” Pres was sitting there with a plate of food; a plate of pork and beans and some bread. Pres said, “Well, how big is the deer?” Grandpa replied, “Oh, about as wide as my gun is long.” Pres jumped up, threw his beans in the fire, and said, “Well good hell, let’s go look at it!” They went up to see it, and when grandpa pulled it out from under the tree, ol Chet took off on a dead run and yelled, “Good hell, you shot an elk!” Grandpa explained to him that it was a deer. They ended up going down and getting the old Scout pickup and got it hung up.

I know most of the hunters out there will want to know the statistics on this deer. It ended up being 43 and ¾ inches wide. They gave him 10 points on one side and 12 points on the other. The deer’s body was also huge. It weighed 230 pounds.

The night that grandpa got his deer, a thunderstorm rolled in.  Preston asked grandpa where he would go if he wanted to get another good buck.  Grandpa told him that he’d go back out to that same area and see what he could find.  Pres ended up shooting a really nice buck in that same area, with almost the same size body.

The pictures of all three of these deer are in that picture above.  It makes me so envious of the deer those guys used to find back in the day.  I know that those caliber of deer still exist, and I’ve seen them from time to time. But to actually harvest one would be amazing!  Grandpa has many other great deer stories.  I feel like these stories need to be shared to both family and hunters alike.  If I’m able, I will tell share those other stories at a later time.

Happy Huntin! For more check out my blog XtremeHuntin! 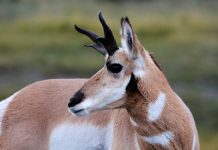 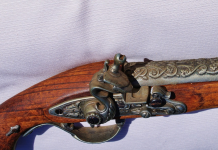 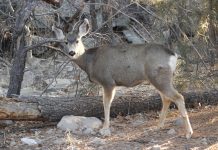